Speed and Endurance in Soccer Conditioning

You are here: Home / Other Sports / Soccer / Speed and Endurance in Soccer Conditioning
7
SHARES
FacebookTwitter 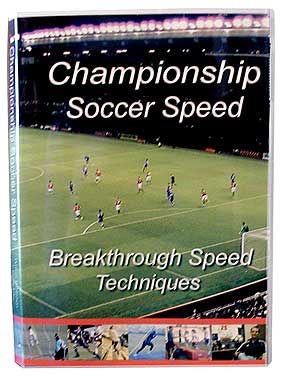 Guest Blogger Niv Orlian wrote this article on the 6 Elements of Soccer Conditioning, and covers the Warm Up, Strength, Power, Speed, Endurance and Agility.

Soccer is an athletic sport and it has become more than a game that awards the player with the best ball skills. Improving your body and your physical traits, as well as chiseling your physical weaknesses is extremely important in modern day soccer and the field that tends to all these aspects is called soccer conditioning.

Soccer conditioning is actually made up of 6 concepts, or sub-sections if you will. The warm up, strength, power, endurance, agility and speed training are key components to a full soccer conditioning program. I won’t go into too much detail about them with the article at hand, but what I do want to do is give you a glimpse on what each component is, how it benefits you as a soccer player (or your players if you’re a coach) and how it can be improved.

At the very beginning of soccer, players would warm up before a match individually and rather disorganized. Besides of a few common warm-up and stretching exercises, they depended on the first minutes of play to get them into the right condition to play at full potential.

Nowadays, warming up is given increasingly higher importance, because it helps a soccer player in two ways: it protects you from muscle injuries such as strains and ruptures and it brings you to your maximum playing ability as the match or training session begins. A third benefit comes from specific stretching exercises, that make you more agile and flexible, which is a great advantage for a soccer player in today’s lightning fast game.

Strength is a crucial factor in soccer, since it affects several abilities used during a match, such as jumping, shooting, dribbling, shielding, balance, tackling or marking. Actually, strength is probably the only conditioning key component that is useful in the same measure for all players, regardless of their position on the pitch. Shielding is often confused with power, but as you will see below there’s a difference between the two.

For example, when kicking a ball towards the goal, strength will work towards a more powerful shot if you have trained out your abs, lower back and leg muscles, but at the same time you’ll need to kick the ball perfectly if you want to achieve a truly powerful and accurate shot. As a tire commercial once put it – power is nothing without control.

There are two types of endurance, short and long range. Short endurance refers to your ability to sprint longer and long endurance is more general and it helps you pull off an entire match. It’s important to know that endurance isn’t just about being able to run for the ball longer in a match. If you get tired, you will also have a harder time focusing on the game, jumping, tackling, dribbling, finishing and so forth. So having good endurance can help you get the best out of yourself for longer periods of time.

Note that it’s very hard to get to a level where you can run tirelessly even in the latter stages of the match. Even professional soccer players that are part of the most powerful clubs in the World tend to get tired around the 80th minute, or earlier if they played a high tempo game.

Agility can help you on several levels in soccer. Goalkeepers will have better reflexes and they’ll be able to get to high balls quicker if they’re more agile. Defenders will be harder to dribble and their tackles will be more accurate and clean with the right level of agility. Midfielders can dribble with ease if they’re agile and strikers work well around their quickness in order to get in front of the defender and finish on crosses, or dribble their way to goal when possible.

Just like with the power-strength confusion, some people tend to put an equality sign in between speed and agility. Whereas agility refers to quick reactions, speed refers to running at full throttle, on a longer distance. Actually, speed has two components: acceleration and top speed.

Acceleration lasts from the moment you start the sprint, to a second or two before you can reach top speed. Indeed, agility plays a crucial role in acceleration, but has little to do with top speed. So focusing on agility exercises may improve your acceleration, but your top speed is difficult to improve, since it’s determined by a formula involving your lower body strength, natural constitution and running technique.

Niv Orlian is the author and the owner of a Soccer Fans website that provides information on various topics related to soccer such as the history of soccer, soccer rules, famous soccer players , soccer fundamentals, soccer nutrition and soccer conditioning.