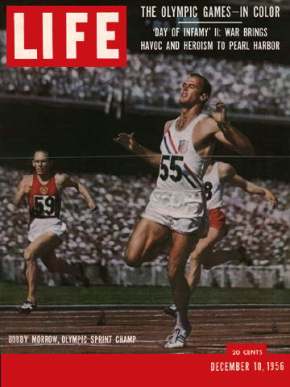 After the passing of J. Oliver Jackson, I looked into my archives to find some videos of Bobby Morrow, the 100m, 200m 4x100m 1956 Olympic Gold Medalist in Melbourne, Australia. Morrow also was a sprinter at Abilene Christian University. The 4×100 meter was a world record.

He retired in 1958, made a short comeback before the 1960 Olympics, but he failed to qualify for the Olympic team. David Sime, who missed the 1956 Olympics due to injury would have to battle it out with Armin Hary of Germany in the 1960 Olympic Games.

This was the first time the Games were televised in color as displayed on the Life magazine cover (left).

Did you notice from the video footage only 6 lanes were used, instead of today’s 8 or 9 lanes? The stadium capacity was over 120,000 so I can only assume this stadium was a converted cricket field. If anyone knows the answer to this trivia question, please add to the comment below as I would like to know.

You can download the video here (warning: this file is over 100 Megabytes), or click on the video below.