This guest post was written by Jay Hicks of PreraceJitters.com

Thirty is definitely the new twenty. I hate to say it, but look at Hollywood. Some of the hottest stars are in their 30â€™s and 40â€™s. Will Smith, Halle Berry, Nicole Kidman, Tom Cruise, Johnny Depp, Sandra Bullock, Jamie Foxx… its actually very encouraging to see these men and women still portraying sexy, provocative, and adventurous roles.

This bleeds over into “real-life” because our society wants to follow in these celebritiesâ€™ footsteps.

In this day and age we have become more interested in our health than ever before. People are watching what they eat and becoming more active. Running track accomplishes those goals without yo yo or starvation dieting.

Nope. These wily, seasoned veteran athletes are all too excited to make headlines in the 2008 Olympic-year season. Potential younger stars need to rack up some miles on the race odometer before they can demonstrate the full extent of their own legacy.

Allen Johnson and Amy Acuff have tasted victory in years past, but both are hopeful that this yearâ€™s season will bring them success on the track again.

These thirty-plus athletes, going on twenty something, earned places on the U.S. team for the IAAF World Championships in Athletics in Valencia, Spain on March 7-9.

Allen Johnson is not fazed that some of his competitors are slightly older than his 15-year old daughter. When asked Johnson said, “The age thing doesn’t bother me, I’m still here.”

Johnson almost won the 60-meter hurdles during the 2008 AT&T USA Indoor Track & Field Championships at the Reggie Lewis Center. The 37-year-old track veteran narrowly placed second with 7.53 seconds, only six-hundredths of a second off the leader. 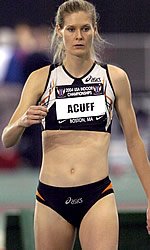 His 06â€™ and 07â€™ seasons were hampered with injuries, however Johnson has been ranked in the top 10 in the world 14 straight years. This year, the 1996 Atlanta Olympic gold medalist in 110-hurdles showed heâ€™s not slowing down. Maybe age is just a number.

The 32-year-old South Texas native has been on top of the American high jump scene since 1993. She racked up five NCAA high jump titles, six U.S national titles, and has competed in the last three Summer Games as a member of Team USA.

Acuff won her fourth overall and second consecutive indoor title on Saturday with a leap of 6 feet, 3.5 inches.

“I started having the best practices of my career,” said Acuff, who has an outdoor best of 6 feet, 7 inches set in 2003. “I thought ‘Indoors is going to work this year.’ It’s just hard to congeal everything. But the combination of training is working really well to be competitive this early. So I am going to go with it.”

Many veteran runners are hesitant about competing during the indoor season because they are concerned that indoors might be a distraction from their preparation for the U.S. Olympic Trials. Allen and Amy rocked indoors to propel themselves towards Beijing.

Clearly, crowâ€™s feet donâ€™t have to mean career death on the track. Besides, theyâ€™ve got ways of dealing with wrinkles these days.