But with the skepticism of Flo-Jo’s 10.49 WR (wind meter questionable) , along Marion Jones guilty pleas with her altitude assisted 10.65, do you think Christine Arron holds the title of the World’s Fastest Woman?

For more insight on Torri Edwards’ training, click here for the HSI’s Inside the Competition and Inside the Training video archives.

Here is a list of the top Ten 100 meter performances courtesy if wiki: 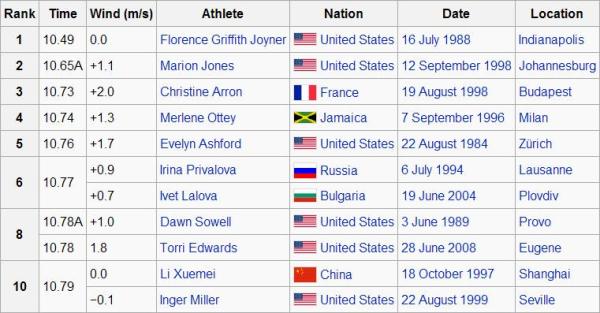 Here is a good argument and analysis from the Times On Line:

Do cheats prosper? Just look at the record books

Vote: should we scrap every world record and start again?

With curious symmetry, Dwain Chambers’s likely court appearance on Wednesday will fall on the 20th anniversary of the day that Florence Griffith-Joyner set a women’s 100 metres world record that may never be broken. In which case, he might like to bear two names in mind.

One is Mary Ruth, the daughter of Griffith-Joyner, who knows what it is like to wake up in the morning at the age of 7 and find that your mother has died in the night. Ten years and two months after her mother set the record, she died in her bed of what the coroner eventually declared to be asphyxia triggered by a seizure. Mary Ruth was sleeping in an adjoining room. But whatever the coroner may have written on the death certificate, Mary Ruth should by now know what was written elsewhere. Either that, or the day she Googles her mother’s name will be a painful one.

In fact, the most illegal aspect of Griffith-Joyner’s 100 metres that record-breaking day in the 1988 United States Olympic trials in Indianapolis was probably the wind. Or the faulty wind gauge. But even if we eradicate her work on that windy day in the quarter-finals on the Saturday, she would still have smashed the record in the semi-finals on the Sunday. And then done it again in the final. It was a handy weekend’s work.

They say that records are there to be broken, but that 10.49sec in the 100 metres is a stand-out exception. No one has come close. If you could line up the fastest women of all time in their fastest performances, Flo-Joâ€ and her signature painted fingernails would be through the finish line more than a metre ahead of the rest. Next in line would be Marion Jones (10.65). And behind Jones is the second person for Chambers to think about.

But Jones, who has admitted to doping, is a tainted sprinter. That much is official. And Griffith-Joyner? We could start with the allegation in Stern, the German magazine, from another American sprinter, Darrell Robinson, that she had once asked him to get her some human growth hormone. And that would just be the prologue.

So it is a pretty good punt that Arron is the fastest clean woman ever. The flaw here, of course, is that we cannot know for sure that Arron is clean, but she has a physique that suggests that she is natural and, for a decade, she has run times that consistently leave her on the edge of the big-money pool. The dopers tend to dive right in.

The strongest evidence in her favour, though, may be that she is bitter as hell, as an interview in L’Equipe, the French magazine, at the start of the year made clear. On the realisation that Jones was going to serve a prison sentence, Arron said that the American deserved her fate. She has lied for years,â€ Arron said. She treated everyone as idiots. I’m not choked she is going to jail. Many people criticised me because I was always the one who lost in the Jones-Arron battle, even if I had very good results. We started running together in 1997. She has stolen my best years. Everything could have been different for me.â€

On Griffith-Joyner, Arron long ago questioned her world record. The L’Equipe interviewer asked her if it was malicious gossipâ€ to suggest that the 100 metres record is hers by right. Malicious gossip, no. Why?â€ she replied. It is a very strange feeling. Deep in my heart I think, â€˜Yes, I am probably the girl who ran the fastest and cleanly.’ But there are two other girls better than me and we can’t delete their records. It is very hypocritical. Although I will never get recognition, that would have made a difference for me.â€

The best chance of Arron – or of someone of her ilk – getting recognition was aired last week in the launch publication of Spikes, a new athletics magazine, which asked the following question: Should we scrap every world record and start again?â€ In a veritable hall of fame of the athletes polled, it was perhaps not surprising that Jonathan Edwards, the triple jump world record holder, argued in favour of keeping his mark and that those shouting loudest at the other end of the argument were Tessa Sanderson and Judy Oakes, who threw the javelin and shot respectively and, in the words of Sanderson, competed against many females from the Eastern bloc who were so masculine it was ridiculousâ€.

Unfortunately for some, the Year Zeroâ€ debate stands no chance. It did in 1999, when the IAAF, the world governing body of athletics, discussed it seriously after the millennium’s end presented a convenient and tidy dateline. Now, though, it has few supporters and, anyway, its flaws are obvious. If Year Zero had been introduced in 2000, the newâ€ world record would have been set in May of that year by Jones, it would have been broken in August by Jones and it would have been held for four years by Jones.

And Arron? Her 10.73 was run in 1998, so that would have been no good to her. She is 34 and not quite able to push her body to the speeds that it used to reach. Her best times this year would leave her about eight metres behind Griffith-Joyner. The Olympic Games? Selection would be an achievement. She will never know the fulfillment that, in a drug-free world, she might have done.

And Mary Ruth? By all accounts she is well and healthy. Her father has remarried, although they toast and honour her mother in a way that most of the rest of the track world does not.

For the record, the coroner reported no proof of recent use of steroids (she was ten years retired) although he was unable to rule out steroid use in her past. Mary Ruth will live with this legacy of suspicion, never able to ask her mother what exactly she did and did not do.

Chambers, meanwhile, will probably have his representatives in court on Wednesday arguing for his second chance. For those the dopers leave behind them, though, there is no second chance.