Who Won the Shoes War? PUMA, NIKE or ADIDAS?

You are here: Home / Beijing 2008 / Who Won the Shoes War? PUMA, NIKE or ADIDAS?
5
SHARES
FacebookTwitter

In the Corporate Olympics, who won the world’s fastest spikes?

Like the Sports drinks and cola beverage industry, the sports shoes market is a highly competitive one, even more competitive than the Men’s 100 meters!

ADIDAS is an acronym for “All Day I Dream About Sex Sports”… just kidding, we all know it’s for the 2 German brothers Adi and Rudi Dasler, with “ADI” and “DAS”.

As fate would have it, Rudi Dasler went on to form Puma in 1948.

I’ll save the history lesson on NIKE, REEBOK and New Balance for another post. After all, it’s still the summer holidays.

Here are some of the pre-Olympic favorites that didn’t win an individual Olympic Gold medal: 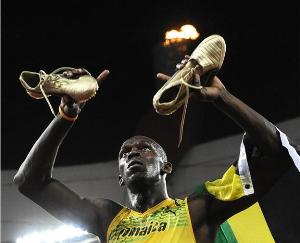 The winner in Track and Field?

By a long shot.

In case you missed this, here are the Chasingbolt.com PUMA video series that were shot prior to the Olympics.

Did PUMA know something we didn’t know?