How Fast can Usain Bolt Run?

You are here: Home / Beijing 2008 / How Fast can Usain Bolt Run?
3
SHARES
FacebookTwitter

It didn’t take long before the academic world analyzed and dissected the amazing 100 meter run by Usain Bolt at the 2008 Beijing Olympics.

After I posted his splits, followed by his coach’s extrapolation of running 9.52, here is a scientific paper by H. K. Eriksen, J. R. Kristiansen, O. Langangen and I. K. Wehus from the Cornell University Library of Physics, Mathematics, Computer Science, Quantitative Biology and Statistics.

The study concludes that the new world record would have been 9.61 +/-0.04 using the same deceleration speed as Richard Thompson, and 9.55 +/- 0.04 seconds if it were not for the pre-finish line celebration.

The scary part is a the corollary of this study predicts a new world record of less than 9.5 seconds is within reach for Usain Bolt in the near future.

Since that very memorable day at the Beijing 2008 Olympics, a big question on every sports commentator’s mind has been “What would the 100 meter dash world record have been, had Usain Bolt not celebrated at the end of his race?” Glen Mills, Bolt’s coach suggested at a recent press conference that the time could have been 9.52 seconds or better. We revisit this question by measuring Bolt’s position as a function of time using footage of the run, and then extrapolate into the last two seconds based on two different assumptions. First, we conservatively assume that Bolt could have maintained Richard Thompson’s, the runner-up, acceleration during the end of the race. Second, based on the race development prior to the celebration, we assume that he could also have kept an acceleration of 0.5 m/s2 higher than Thompson. In these two cases, we find that the new world record would have been 9.61 +/- 0.04 and 9.55 +/- 0.04 seconds, respectively, where the uncertainties denote 95% statistical errors. 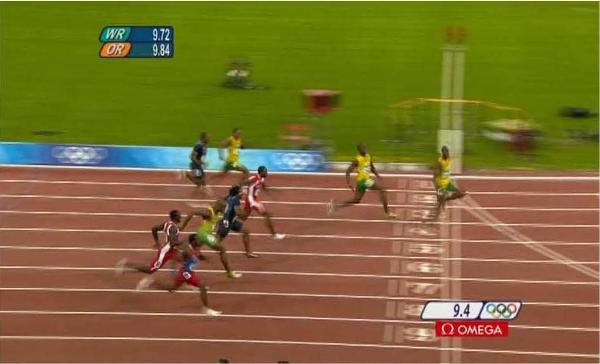 Glen Mills, Usain Bolt’s coach, suggested that the world record could have been 9.52 seconds if Bolt had not danced along the track in Beijing for the last 20 meters. According to our calculations, that seems like an good, but perhaps slightly optimistic, estimate: Depending on assumptions about Bolt’s acceleration at the end of the race, we find that his time would have been somewhere between 9.55 and 9.61 seconds, with a 95% statistical error of +/-0.04 seconds. Clearly, the uncertainties due to the assumptions about the acceleration are comparable to or larger than the statistical uncertainties. Therefore, 9.52 seconds does by no means seem to be out of reach.

In Figure 4 we show an illustration of how such a record would compare to the actual world record of 9.69 seconds, relative to the rest of the field: The left version of Bolt shows his actual position at 9.5 seconds, while the right version indicates his position in the new scenarios.

Of course, there are potential several systematics errors involved in these calculations. For instance, it is impossible to know for sure whether Usain might have been tired at the end, which of course would increase the world record beyond our estimates. On the other hand, judging from his facial expressions as he crossed the finishing line, this doesn’t immediately strike us as a very plausible hypothesis.

Another issue to consider is the wind. It is generally agreed that a tail wind speed of 1 m/s improves a 100 meter time by 0.05 seconds (Mureika 2000). Further, for IAAF (International Association of Athletics Federations) to acknowledge a given run as a record attempt, the wind speed must be less than +2 m/s. When Bolt ran in Beijing, there was no measurable wind speed at all, and one can therefore safely assume that the world record could have been further decreased, perhaps by as much as 0.1 seconds, under more favorable wind conditions.

A corollary of this study is that a new world record of less than 9.5 seconds is within reach for Usain Bolt in the near future.

See also  The “Speed City” Documentary – We Need your Help