Trace elements and minerals are often sought after elite athletes to give an edge to “healing”.

You probably heard about copper bracelets for arthritis or even magnets to provide homeopathic and holistic pain relief.

Paula Radcliffe, the current World Record holder of the woman’s marathon, was seen wearing a titanium necklace during her 2007 New York Marathon victory.

Japanese based Phiten Co. developed a patent to make the metal water-soluble where it can be incorporated into fabrics and jewelery.

Titanium has been coined “Twice as strong as steel; Half the weight”. Because of its inert properties to the human body, titanium has been used for decades as a “biomaterial” in damaged body parts, such as Titanium screws to correct a fractured bone.

Of course, Titanium hasn’t been proven effective in scientific studies, but if professional athletes endorses their products or is seen wearing them on television, who will stop the subliminal advertising?

Here is a partial article from Starbulletin.com: 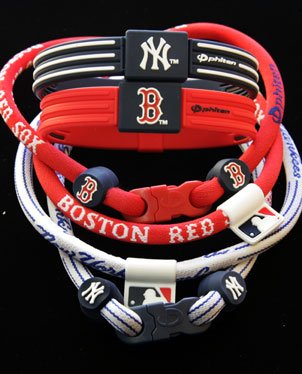 Phiten Hawaii Co. has seen a surge in demand for its titanium products in the last few years, due largely to word-of-mouth advertising and celebrity endorsements, including star pitcher Randy Johnson of the Arizona Diamondbacks and Paula Radcliffe, the 2007 New York Marathon women’s winner.

Radcliffe’s marathon victory came just nine months after she gave birth to a daughter, and exposed thousands of fans and viewers to one of Phiten’s top-selling products, a titanium necklace.

The same necklace is sported by more than 200 Major League Baseball players and more than 80 percent of Japanese baseball players, leading many to think that it’s just part of their uniforms.

“Considering that baseball players rub snake oil on their arms, smear mascara under their eyes and keep pine tar stored on their helmets, it should come as no surprise that they are starting to wear necklaces embedded with titanium,” wrote sports writer Lee Jenkins, of the International Herald Tribune.

Jenkins’ comment highlights a typical criticism — that titanium products touted as healing aids might in fact be just placebos.

“Phild Processing,” Phiten’s patented process for using titanium in items such as fabric and liquids, is a closely guarded secret, which can raise red flags for naysayers. But Paul Vaughn, general manager for Phiten Hawaii, says the proof is in the results.

Vaughn says he invites customers to try a bit of titanium tape on a sore spot. “We’ll tell them to shrug their shoulders and say, ‘Do you feel that knot?’ and they’ll say, ‘Yes, I’ve had that for years.'”

After applying a titanium patch, he says, many people can instantly feel the difference.

The “try it” approach and low-pressure sales strategy, combined with the relatively low prices of their best-selling bracelets and necklaces ($6 to $60) make Phiten a low-investment option for those investigating healing alternatives.

The strategy has been a success, and Phiten now has more than 150 stores worldwide, a new line of Major League Baseball-monikered products (your team’s logo on wearable titanium) and a boost in visibility from the Olympics, where athletes could be seen donning the “magic metal.”

Vaughn uses the image of a television set with a static-filled picture to explain how the products can ease pain and supplement healing. “If you stabilize the current, almost instantly the picture becomes clear.” Titanium, a good conductor of electricity, he says, works in a similar manner to stabilize energy flow within the body.

Honolulu businessman Steve Anderson said titanium products have helped him, but not dramatically. “I’d say I’ve felt an improvement in the pain in my knees, but nothing miraculous. I’d say it feels about 20 percent better than without the titanium braces.”

Anderson also said that his wife uses the products, including titanium lotions, but notices only a slight difference.

Another local Phiten customer, Balwan Singh, is more enthusiastic. Singh is a bus driver for Alamo Rent a Car at Honolulu Airport and must repeatedly lift heavy suitcases for passengers.

“The titanium really works for my shoulder, where I’ve had some repetitive stress injury,” Singh said. “I don’t know why or how, but I can feel it. It works.”

Phiten Hawaii has a straight-trade deal with the University of Hawaii athletic department, which receives Phiten products in exchange for signage at UH athletic venues. Not only does the company name get attention, but players can be seen wearing the products.

Whether the result of smart marketing or legitimate healing value, Phiten is clearly set to conquer the local market for healthy metals. Other companies make titanium products, but Phiten has focused its expansion in Hawaii through the UH connection and limited-edition products specific to the islands in design and color scheme.

“It’s suspicious,” says Dr. Kate Schofield, a Cincinnati-based chiropractor with a summer home in Kailua. “There is zero evidence. It might all be a wonderful marketing of the placebo effect. But it seems harmless.”