When David Neville dove for the finish line at the 400 meters finals at the 2008 Beijing Olympics, he broke up the pre-race favorite prediction of LaShawn Merritt, Jeremy Wariner and Christopher Brown of Bahamas. With an American sweep, no one won the 400 meter Olympic prediction contest, as the most common entries were either:

His nose dive wasn’t that apparent if you only saw the results (44.80 vs. 44.84) but the photo finish was quite interesting to read!

Who says leaning for the tape is only for short sprinters?

Here is the 400 meters photo finish courtesy of the IAAF: 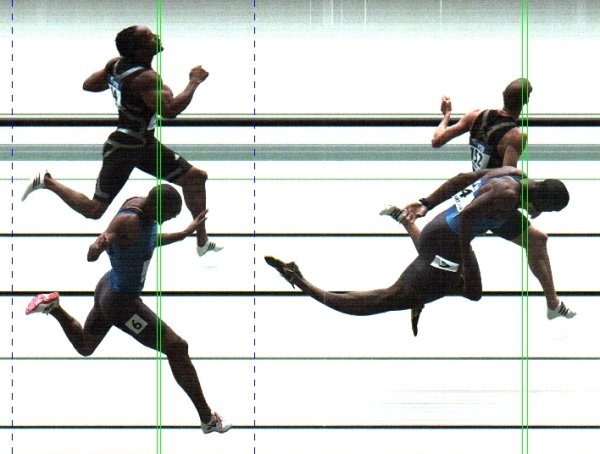 In the above picture, Angelo Taylor and LaShawn Merritt are closest to the camera.

In June, I posted an article on How to Read a Finish Line Photo as well as Photo Finish: Leaning at the Tape from August 2007.

The word “torso” is used in the rules, which normally means the chest, but in this case, it is the shoulders and not the arms.

Leaning for the line can be mastered, as Bud Winters would train his athletes repeatedly to do this, including 1968 400 meter gold medalist Lee Evans.

I try to teach them that during the last three strides they must Push! Push! and Dip! They must push hard at the ankles and in the last stride drop the head and bend at the waist and throw the hands back and to go past the tape to 401 or more meters.

For a 100 and 110 meter hurdler (women’s and men’s) it is much easier to lean for the line as you know the exact number of steps coming off the 10th and final hurdle. Larry Wade was famous for doing a sideways turn to get his shoulder first to the line. He knew the rules!

When 0.001 seconds is used to determine the winner from the loser, I am surprised to see coaches not emphasizing this lost art more often.