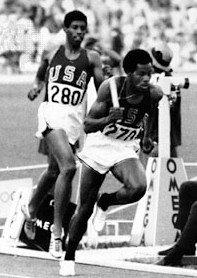 In the past 18 months this Blog has been around, we’ve had a few great ones pass away in such a short period of time:

Larry James is best known for his silver medal at the 1968 Mexico City Olympics in the 400 meters with a time of 43.97 seconds, a time that would still win a silver medal 20 years later. He also won a gold medal at the same Olympics by running the third leg on the USA 4×400 m relay team, which set a World Record of 2:56.16 seconds, which lasted until 1992. The photo shows James handing off to Lee Evans.

Instead of re-inventing the wheel, there were 2 great articles on Larry James on the web. Click on the links for the full article.

Many long time track and field fans recall Larry’s winning 400 leg for Villanova in the 1968 Penn Relays– named one of the 10 greatest moments in Penn Relays history– where the “Mighty Burner” ran a 43 second leg beating a Baylor runner who ran “only” a 45 second leg. Long time Villanova coach Jack Pyrah called it the greatest race he had ever seen.

James, nicknamed the Mighty Burner, was an explosive runner, but deceptively so. Slender and carrying only 155 pounds on his 6-foot frame, he ran with a floating, almost feathery stride.

He won his Olympic laurels in Games best remembered for a black power demonstration staged by his fellow African-American teammates Tommie Smith and John Carlos during an awards ceremony in October 1968.

Standing on the winners’ platform, Smith, who had won the gold medal in the 200-meter dash, and Carlos, who had won the bronze in that event, bowed their heads and raised a black-gloved fist as the “The Star-Spangled Banner” was played.