Here are some quotes from the original article on timesonline.co.uk, and some commentary and analysis that follows it.

On Extrapolating 60 meters performances to 100 meters

Charles van Commenee, the new head coach at UKA, has said that Chambers is welcome back and the sprinter is hoping that this message will lead to a change in thinking. Having run 10.00sec at the Olympic trials, he believes that he could have won a silver medal behind Bolt in Beijing.

He is training alone, with no coach, because he wants to stay close to his family, but he watches regular videos of Bolt.

I get asked this question all the time during our Seattle indoor winter meets where they race the 60 meters distance:

While there are conversions for 100/200, 200/400, and even 400/800, I don’t think there is a correct conversion to extrapolate a 60 meter time to a 100m time. There are too many factors to include, and speed endurance is one of them. For an in depth look at splits and calculating theoretical potential, see my previous article on track and field conversions.

The 60 meter and 100m performances are not a fair comparison. The 60 meters is purely Alactic Anerobic, where the 100m is both Alactic Anerobic and Lactic Anerobic. Plus indoor 60 times do not have the wind factor like the outdoor 100 meters. I also think the indoor 60 meter race has a psychological factor of sprinters slowing down too early before crashing into the padded wall. 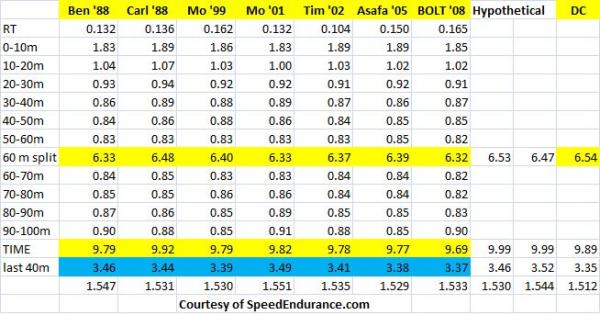 I’m sure Track Statisticians can look up the all-time world rankings for men who ran faster than 6.47 and didn’t break 10 flat. Moreover, there are some men who broke 10 but had a 6.54 or slower 60 meter time, or simply never raced 60 meters indoors.

If my numbers are correct from above, then a 6.54 is roughly a 10.00, which is exactly what he ran at the Trials. To run a 9.89 based on his 60 meters, he would have to run the last 40 yards in 3.35, which is faster than Usain Bolt’s splits. This would be an incredible demonstration of exceptional speed endurance – a rarity in world class 100 meter sprinters, but they do exist.

Below, later in the article, he talks about how he can beat Usain Bolt.

On Asafa Powell being the Fastest Man on Earth

Chambers says that there is “no way on earth” that Bolt should have won the Olympic 100 metres final in Beijing. The British sprinter says that Asafa Powell, the previous golden boy of Jamaican athletics, had the ability to take the title but blew the mental battle.

“I don’t give a damn how fast Bolt ran, Powell should not have lost that medal,” Chambers said. “I watched his last leg of the 4x100metres final and that was awesome. He’ll get the world record back again next year. It will be crazy with Bolt there, too; I want to be there hanging on to their coat-tails.”

True, Asafa Powell has the World’s Best for the 100 meter relay leg: 8.7 seconds anchor leg compared to Bolt’s 9.0 on the curve with two baton exchanges.

But I do believe Asafa could run sub 9.70, given the right conditions. He ran 9.72, right? It’s a good thing Bolt slowed down in Beijing, otherwise he would have run 9.64.

Chambers worked with Bolt in Jamaica in 2006. Given the sport’s reputation and Jamaica’s lack of an anti-doping body, eyebrows were raised after Jamaica dominated the sprints in Beijing, so what does Chambers think? “Well, they haven’t tested positive,” he said. “That’s all you can say.”

In our judicial system, we are innocent until proven guilty. Sadly, our sport has become the other way around. You are presumed guilty if you suddenly break 10 seconds in a 100 meters. Or win an Olympic Gold medal in the 200 meters coming out of nowhere, then repeat again the following year at the World Championships.

On Stride Length and Stride Frequency

Chambers, who says that “attention to detail” in coaching has been the key to Jamaica becoming the sprint capital of the world, is confident of beating Bolt in 2009.

“Usain can do the 100 metres in 41 strides,” Chambers said. “I would take 43 or 44. But I have better stride frequency: 4.96 per second compared to 4.65. To beat him I need to maintain my frequency and improve my stride. Beijing was his time to shine, but he’s only human.”

In a way, Dwain is correct. He should “improve his stride”, but not at the expense of lengthening the stride, as that would either (1) cause a braking effect (2) increase the air time. In both cases, that would be bad. Usually, average and elite athletes of the same height and limb length have similar stride lengths.

But Usain Bolt is 6 foot 5 inches.

He could increase his stride frequency, but that would involve taking smaller steps, and that may not help either.

So the only option to “improve his stride” is to reduce his ground contact time while maintaining stride frequency and stride length. Even a 0.01 second improvement over 43 strides is 0.43 seconds. That’s like taking a 10.10 sprinter down to 9.67! Enough to beat Usain Bolt.

So there you have it. If you enjoy this type of commentary, where I breakdown an article with further discussion and analysis, please let me know, and I’ll do more in the future.