Starting blocks were developed in the late 1920’s over the alternative of digging holes into the ground. They were patented in 1935, and have officially been used at the start of sprint races since 1937. Several iterations of starting blocks have been filed by the US patent office since then.

They have always been a subject of controversy when it comes to the term “a fair start” for everyone.

Other than pressure pads to detect false starts, and speakers installed in the rear of the blocks (aka the silent gun vs. the loud gun theory), the most obvious change in recent times is the height of the blocks. The big question remains: How much contact should the bottom of the foot plate have on the block pads?

The early days (i.e 1970’s) had a low block where the heel is exposed, as seen in the Valeri Borzov photo below. This was good because the stretch reflex generated by the calf muscle (i.e. gastrocnemius) provided a greater force output.

Then sometime in the late 80’s and early 90’s they had blocks high enough to provide complete foot contact, including the heel, for the entire foot. One theory was a greater force applied due to maximal contact. I witnessed these blocks from Bruny Surin at a local meet back in Montreal.

The “high blocks” starting popping up everywhere and became the latest fad, supposedly to produce a better start.

From 1986-1988, the whole world took notice of Ben Johnson’s starts as it appears he leaped out of the blocks with both feet at the same time, similar to a swimmer. How many times have you seen younger athletes imitate this? I guess imitation is the greatest for of flattery. If you can full squat 600 pounds.

Then they went back to the “short blocks”, as seen in the 1996 Olympics with the Micheal Johnson Golden spikes. 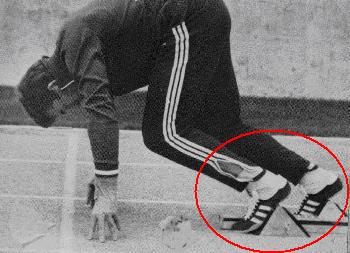 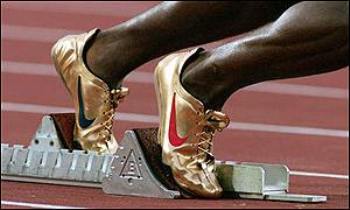 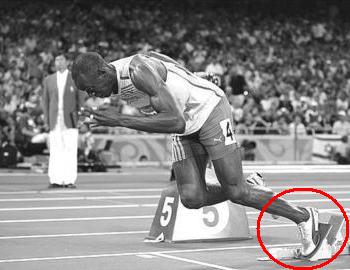 Tissot Starting blocks from the 100 meters at the 2007 Pan American Games in Rio de Janeiro. 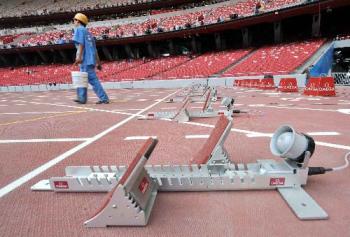 Omega Starting Blocks from the 100 meters at the 2008 Beijing Olympics. 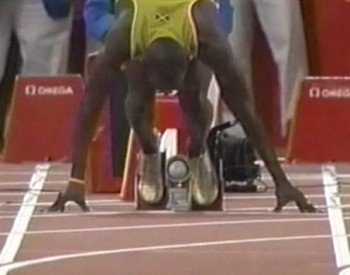 In the 2008 Olympics, you can see the starting blocks foot positions from photos of Usain Bolt.

The other question to consider is whether you should have your toes in contact with the ground, or if your feet should rise onto the blocks completely.

In Bolt’s case, he rises about 1 inch above the ground. If you believe in having your heel exposed for the stretch reflex, then rising on your blocks will allow this. Having big feet helps, too.

There is no right or wrong in this case, as it’s simply a matter of finding the proper and effective start position. You can still get an effective 2-point crouch start like 800 meter runners which should not be a problem if you are wearing spikes. No slipping here.

If you think the calf muscle is the important force generator, then the shin angle at the set position is also important. If the entire duration of foot contact is providing force, then the final shin angle before the foot leaves the ground must also be considered. You must take in account of the whole motion.

There are hundreds of research papers including Ralph Mann from the 2007 USATF NPEP on the best start technique out of the blocks based on angles. Dr. Mann even goes further on doing squats at specific angles to optimize the explosiveness of the start.

That being said, there is another alternative to an effective start using your spikes as contact to the track, and having the correct angles in place, similar to a crouch start, but this is a 4-point start. Adarian Barr from NextLevelAthleticsAndFitness.com has some innovative products out there.