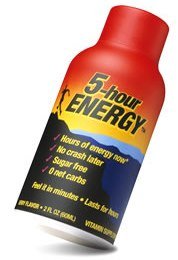 In large American cities, you have to enter your 5 digit zip code when paying by credit card at a gas station. That doesn’t help me with my 6 character Postal code, so I am always forced to go inside and pay the cashier.

On my last trip to Las Vegas, I noticed they really promoted the 5-Hour Energy “Shots” everywhere. Different products and different flavors were visible at the counter. Of course, I like to experiment with different products as sometimes my body is a chemistry experiment. Unlike Dwain Chambers, I only try legal stuff.

Basically, the 5-Hour Energy Shots Drink is Red Bull without the sugar and calories, plus the added benefit of vitamin B6 and B12. No sugar also means no carbs.

The main ingredients are Taurine, Tyrosine, L-Phenylalanine, and of course, Caffeine.

The label says “Contains Caffeine comparable to a cup of the leading premium coffee” … I assume they are referring to Starbucks?

I often worry about drinking too much coffee, as too much caffeine plus the pre-race nerves & adrenaline may result in an extra preliminary round with a race to the toilet.

I already covered B12 in the two articles called B12 Supplements – The Vitamin B12 Deficiency Debate and Why is Vitamin B12 the Scapegoat?

Caffeine is known to destroy Vitamin B6 among other numerous vitamins, so I guess that’s the reason why it’s included?

My Experiment with the 5-Hour Energy Shots Drinks

At 11 am, I drank the entire 2 oz bottle in 2 sips. I tried the berry flavor, and it tasted very good without being refrigerated. Not bad for no sugar.

I did not get a Niacin flush, as warned on the label as well as their web site. Yes, I did my research!

By 8pm, I was still quite alert despite a very busy day in the office.

Personally, it had the same effect as taking Vitalyze. I didn’t feel the effects of caffeine as compared to Starbucks or Cafe Artigiano. I can definitely see this as a substitute to RedBull drinkers. For air travel, it’s a lot more portable then carrying big cans of your favorite beverage. 3 oz is the limit for airline carry-on.

I’m not sure where you can buy the 5-Hour Energy Shots Drinks other than gas stations. Speaking of gas stations, your mileage may vary with this drink.