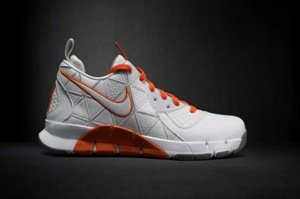 The Nike Zoom MVP Trash Talk, which launches at retail on April 22, 2009, Earth Day, is a classic hoop shoe designed for athletic performance and made using scrap materials, giving a second life to waste generated in the footwear manufacturing process.

The shoe will also be packaged in a new Considered Design shoebox. Like Nike’s first recycled content box in 1995, this new box is still made from 100 percent recycled fiber, but now features a new design which reduces the fiber content by approximately 30 percent.

“I have a passion for preserving our environment, so if I can wear a Nike basketball shoe that reuses waste, performs on the court and is packaged in a shoebox made from 100 percent recycled fiber, then that’s a winning combination,” said Nash.

When the new Considered Design shoebox is fully launched across all Nike footwear styles in 2011, the company expects that it will translate to an annual savings of nearly 12,000 metric tons of cardboard or the equivalent of 200,000 trees.

The Nike Zoom MVP Trash Talk is one of Nike’s Considered Design products because:

“The goal of Considered Design is to create performance innovation products for athletes that reduce waste and toxics, while increasing the use of environmentally preferred materials. We’ve done that with the Nike Zoom MVP Trash Talk,” said Nike Footwear Designer, Jason Petrie. “This year we took our commitment a step further by packaging the shoe in a new Considered Design shoebox which uses 30 percent less fiber.”

Nike is releasing a limited number of the Nike Zoom MVP Trash Talk shoes. The shoes will be sold at the House of Hoops by Foot Locker in LA, New York and Chicago with a suggested retail price of $92.

As part of Nike’s commitment to Considered Design, the company has committed to designing all footwear to meet Nike’s baseline Considered standards by 2011. Achieving this goal would mean waste in Nike’s supply chain will be reduced by 17 percent and the use of environmentally-preferred materials will be increased by 20 percent. Nike’s Considered ethos challenges designers to use environmentally preferred materials, reduce waste, create sustainable manufacturing processes and use innovation to help reduce Nike’s overall environmental impact.

*Nike Grind: Nike collects and recycles material left over from footwear manufacturing process and uses it in the outsoles of Nike footwear.

**Ethylene Vinyl Acetate (EVA) is commonly known as “foam rubber”. Waste scrap is collected during production of midsoles, ground into fine particles and then reused in Nike sock liners and new midsoles.

See also  The Effects of Shooting a Basketball