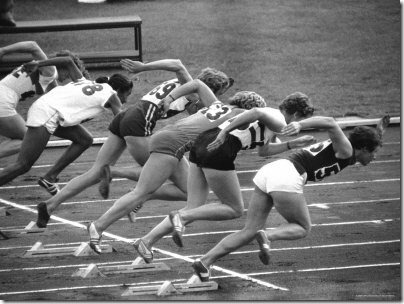 I am a collector of Olympic memorabilia.

I love the old stuff, and I try to collect videos of past Olympics, books, post cards, posters, T-shirts, and even a Michael Johnson collectors watch (Thanks Derek of Running Mechanics for the birthday gift!).

But my favourite collection has to be the Time Life magazines.

The image on the left is from the archives of LIFE magazine, which first appeared on December 10, 1956

The internet is destroying old school media such as newspapers and magazines.  Everything is online or in digital format these days.

So, if you are an old geezer like me, you know who George Silk is.  Or at least, you’ve seen his photographs from days of yesteryear.

Who the heck is George Silk?

George Silk was a war photographer in 1939, and served as a photojournalist for Life Magazine in 1943.

I am a bit biased to photography as my original career was a photographer and journalist. (I guess that makes me a photojournalist?)   Back then, I used film and print, and my Sunday nights was dedicated to developing my negatives in film tanks, followed by my enlarger to make contact sheets, and finally paper prints.

Kids today have no idea what we went though back then.  The smell of Dektol and Hypo still lingers in my memory cells.

Gunhild Larking was Swedish high jump champion from 1952-1956 and came 4th in the women’s high jump in the 1956 Melbourne Olympics!  She was probably the most photographed female athlete in that Olympics Games.

We all know who Anna Kournikova is, and as much as she is highly photographed, she never won a Major Championship and became a media darling.

George Silk died on October 23, 2004 shortly before his 88th birthday.