Football season is around the corner, so it’s time for yet another 40 yard dash post.

You just can’t get away from the 40 yard dash “trash talk” when coaches and athletes float inaccurate numbers from a 40 yard dash time.

The 40 yard dash was an arbitrary number, just like the 72 ounce steak “eat in 1 hour and it’s free” in Amarillo Texas on Route 66.  Someone chose 40 yards as the distance a football player needs to run, just like 72 ounces (4.5 pounds or over 2 kilograms!) of steak as simply a very large amount of steak eaten by one human in one sitting.

Comparing a 40 yard dash and a 100 meter sprint is a moot point, but it’s fun to dissect and analyze.

Don’t you hate it when you look at the splits, subtract their reaction time, and calculate Ben Johnson only ran 4.37 and Usain Bolt ran 4.35? (see chart below)  These sprinters (among others) are the fastest men in the world in their era, and yet we hear football players with much faster times?

Nothing against Football players, but they don’t train for the 100 meters like true 100 meter sprinters.  Ego aside, how can a football player have a faster time than a sprinter?

Then again, the WR for the standing long jump is held by a shot putter, and not a long jumper!

Why Split Times are Bogus?

In the 100m, you accelerate as long as possible to reach top speed, then maintain top speed. You want to cover the distance in the shortest possible time.

The “problem” is World class sprinters take longer to reach top speed because they have a longer acceleration phase.  (In reality, the “problem” is a nice thing to have, right?)

Novice 100m runners and female sprinters will reach their top speed sooner, so more of their race will be speed endurance (NOTE to Coaches – worry less about their reaction time and starting blocks, and focus on acceleration and speed endurance.  Why work on improving 0.10 seconds when you can improve 1.0 seconds?)

Breakdown of a 100 meter sprint

Everyone is familiar with the different phases of a 100 meter sprint:  reaction time, acceleration, transition, maintenance.

Based on the real splits, especially the 30-40m split where the 40 yard lies, they have yet to reach their top end speed.

But what would happen if they “trained seriously” for the event and reached their top speed earlier?

And finally, what if you subtracted 0.24 from their FAT time to downward convert it to a hand time?

Below is a video comparing who is really faster, Deion Sanders 4.17 or Usain Bolt. 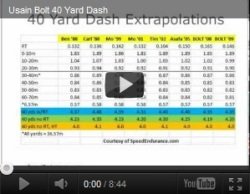 In my example, we are ASSUMING world class sprinters can reach top speed at 30m, and not between 50-60 meter mark. 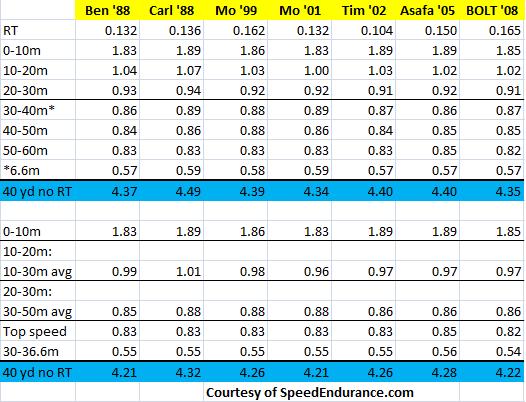 You can mix and match the distances and phases around to add up to 40 yards.  The chart is a fun illustration for discussion purposes.  If the 4 phases are equal, then I would calculate using 9.15m splits to equal 36.6 meters.