This is Part 1 of a 2 part series. Click here for Part 2 with 10 meter splits

I felt a WR was imminent after watching his SF, and I knew his chest thumping slowdown in Beijing showed me he could run low 9.60.

Now, in all fairness, I added Tyson Gay’s splits, just to show what it will take to beat Usain Bolt.  I mentioned his 9.68 +4.1 wind aided race winning the 2008 USATF Olympic Trials in a previous post.

You can also thank Tyson Gay for making Bolt push though the race.  Bolt came to Berlin to win.  The World Record was bonus.

Note: The 2008 Olympic Trials splits are courtesy of the USATF Women’s Sprint Development with the HPC.  2009 World Championships splits courtesy of the IAAF which can be found here. (PDF) 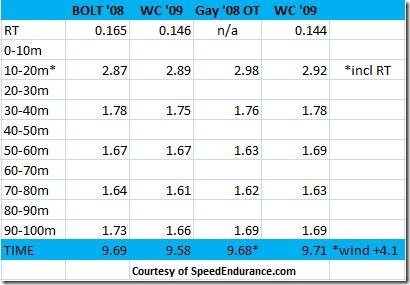 How Fast Can Usain Bolt Run?

Just using simple math, if he had the same 20m start as Beijing, that would give him a 9.56.

So it really looks like Coach Glen Mills was right after all, as he once claimed Usain could run 9.52!

So while most WC 100m sprinters reach their top speed at 50-60m, all the athletes reached their top speed between 60-80 meters according to the data, which makes sense considering they are still accelerating from 40-50m.  Don’t let the 20m segments fool you, as it really skews the curve.

This leads me to the final part of the article: who gets the credit for the improvement? Top end speed, or speed endurance?

We know his training was delayed twice, so what is he doing that is helping set World Records?

My theory is his speed endurance training sessions from 80-150m is actually helping his top end speed.  You want to “delay” your top speed as long as possible.  You want a smooth acceleration.. the longer, the better.

Those workouts of 4x30m, 1x60m, 1x80m, 1x100m, 1x120m, 1x150m on a short to long training plan session with full recovery are aimed directly for speed endurance (i.e distances from 8-15 seconds) but they will teach you to stay relaxed while utilizing your top end speed.

In the above workouts, we don’t even use starting blocks (except for the 4x30m). A simple falling start or rolling start is all that is required.  Block work can be saved on days when you have a technical block workout.

In a similar way, Clyde Hart likes to “train slower to race faster” which I’ve covered in several articles on this Blog.