Watching the Men’s Pole vault with an injured Steve Hooker inspired me to write this article.

In the past article on Technological Innovations in Track and Field,  I forgot to mention the Pole vault standards that support the bar were changed from 76mm to 55mm.

We are talking about the days of super dominant Sergey Bubka from 1984 to 1994.  And with today’s world leader Steve Hooker’s 6.06m on the smaller pins, World Record attempts are even harder.

I am not here to bash Sergey, but he did “slice the bologna thin” by attempting WR in 1 cm increments once he broke 6 meters..  You can’t do that for the 100 meters.

When you pole vault over the bar, often your chest or torso will brush the bar.  As it wobbles, some jumpers can manipulate the bar on the pins so it stays put.

Usually technical changes are in favour of improving performance (cinder vs synthetic tracks, for example) but in this case it’s like the shortened javelin… you will be chasing a “ghost” world record.

So if you are really picky, you would include both Bubka and Hooker’s World Leader listed, with one having an asterisk.

Here is a cut and paste from the wiki site.  Note it does not include his 6.15m indoors set in 1993.  Also note his citizenship changed prior to the 1992 Barcelona Olympics. 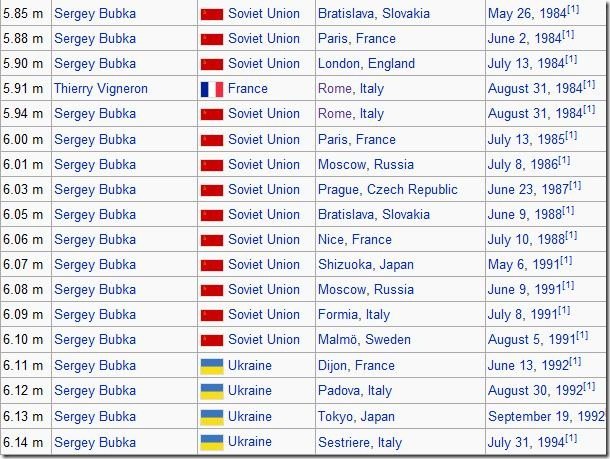