Complete meet information for the IAAF Grand Prix meet in Rieti, Italy can be found here.

And we all know what happened at the Olympics later that summer when 9.69 became a household number.  (Today, 9.58 is the standard) 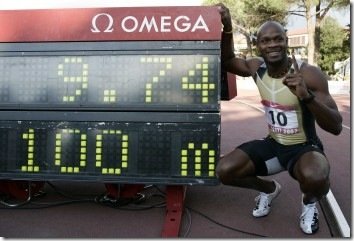 A lot has happened in the past 2 years!  And we’re not talking about the swimming speed suits!

Obviously the Rome Gala Meet is the biggest draw in Italy, but kudos goes to Rieti for drawing World Class athletes after the World Championships or Olympics.

A lot of attention goes to Zurich or Brussels or even the Aviva British Grand Prix in Gateshead, UK.

Where the heck is Rieti?

Rieti is about 90km North East from Rome or about a 90 min car ride.

Kobe Bryant’s father, Joe Bryant, played in Rieti from 1984 to 1992.  Thus Kobe attended school in Rieti and as a result he is fluently bilingual in Italian.

If you visit Rome, make sure you rent a car and see the one of hundred smaller “Centro Storico” towns outside the main city, including Rieti.  You will not be disappointed.  Just make sure you eat lunch by 1:30pm as most stores and shops close between 1-5pm in the heat of the day.