In my last article about the Harry Jerome, Bill Bowerman and the University of Oregon connection, I didn’t mention Otis Davis, the Rome 1960 400 meter and USA 4x400m Olympic Champion.

I am currently in Rome, so there is a special connection every time I visit the Rome Olympic Stadium, whether it’s for the Rome Golden Gala or a Series A Football (Calcio) match.  Team Roma and Lazio both share the same stadium.

Otis Davis started at the University of Oregon as a basketball player, and didn’t take up Track and Field until 1958 at the “late” age of 26.

Here is the famous photo finish of that race.  Note the torso and not the head is used for measurement even if Kaufmann’s nose appears to break the tape first. 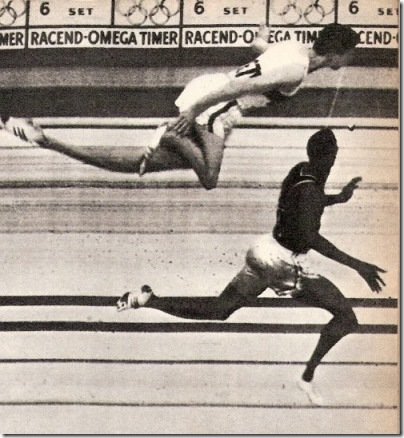 The 1960 400 meters was the first time the Semi-Finals and Finals were contested on different days.  Today, it is not uncommon to have a rest day between the SF and Final to promote WR times.

The 4x400m relay was equally as exciting as these same two men ran anchor, but once again the Americans showed their dominance in winning the Gold in 3:02.2.

George Silk had one of the most memorable photographs of Otis Davis and Carl Kaufman in the 4 x 400m relay, which you can buy from LIFE magazine.  A picture is definitely worth 1000 words… or 44.9 seconds…or 3:02 minutes. 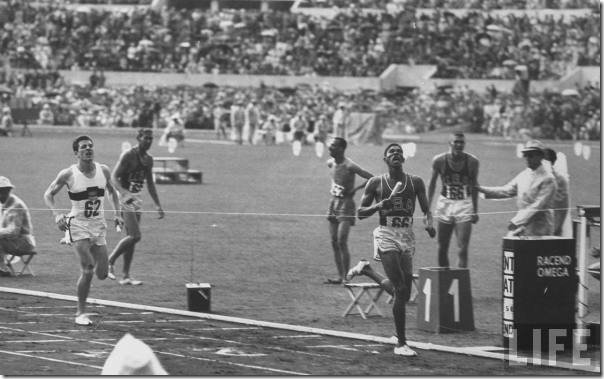 Otis Davis ran one more year in 1961 winning the 440 yard AAU and then retired from the sport at the age of 29 where he later had a successful career in teaching and coaching.  He was appointed the Director of Recreation of the Sports Complex for the U.S. Military in Germany in 1980.

If you want to read more about the 1960 Rome Olympics, then read David Maraniss’ book Rome 1960: The Summer Olympics That Stirred the World