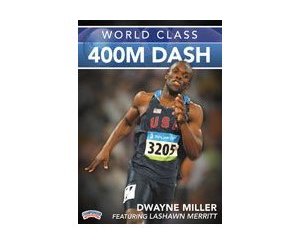 You’ve covered a lot of great 400m coaches on your website like Clyde Hart, Bud Winter and Stan Dowell.

How about LaShawn Merritt’s coach?  What kind of training philosophy does he have?  Long to Short or Short to Long?

First of all, Dwayne Miller is LaShawn Merritt’s coach.

His training philosophy is definitely a long to short approach, with an emphasis on aerobic capacity similar to Clyde Hart.  He is also blessed with an athlete like LaShawn who has good 200 meter speed – Michael Johnson and LaShawn are the only 2 athletes who have Personal Bests of sub 20 200m and sub 44 400m.

If you attended the USATF Olympic Trials, they hold a SuperClinic series on the rest day every year since 1992.  With the proposed new Olympic Trials schedule, having the Trials on 2 weekends may destroy these clinics.

Last year’s SuperClinic was held on July 1, 2008 and Dwayne Miller presented his program.  You can download the PDF of his Annual Plan labelled “from Prep to Pro” here (PDF).

For a free audio podcast of Dwayne Miller, visit the Canadian Athletics Coaching Centre and go to their multimedia section.  (Note: You will need to sign up for a free account to listen to the Podcast)

See also  Curve Running and 200 Meters in Lane 8? No problem!

I like the way Dwayne Miller describes himself with 3 hats: Track Coach, Strength Coach, and Nutritional Advisor.  This is my philosophy as well, but I also wear another hat: Recovery and Regeneration advisor.  If you add Olympic Historian, then you have all the elements that make up this Blog!

I do find a 1 hour long run in the fall excessive for a 400 meter runner, but if it works for him, great.  There is a lot of over distance work going late into the season.  And my guess he doesn’t plan nor peak for the indoor season.

Miller’s approach to speed work is similar to Clyde Hart where he finds too much too early will injure an athlete.  Short to Long coaches will argue this point at nauseam but you can’t argue with success.

Listen to the Podcast for an insightful look at another great coach.