Bahamas Track and Field – From Vancouver To Athens

You are here: Home / 400 meters / Bahamas Track and Field – From Vancouver To Athens
0
SHARES
FacebookTwitter 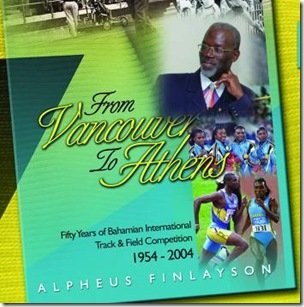 Because the 1954 British Empire and Commonwealth Games were held in Vancouver, BC, Canada.

The first British Empire Games were held in Hamilton, Ontario, Canada in 1930, and it was renamed to simply “Commonwealth Games” by 1978 in Edmonton, Alberta, Canada.

That’s a lot of references to Canada for these games!

Back to the book…

The book is not available at Amazon (yet).  Currently, it is only available in Bahamas.

Who the heck is Alpheus ‘Hawk’ Finlayson?

Alpheus ‘Hawk’ Finlayson is a former long and triple jumper and a IAAF Council member since 1999.  He is also a CACAC Executive since 1993.

Chandra Sturrup, the next Merlene Ottey?

If you thought the name Chandra Stirrup was a name from the past, think again.