Other than Bolt, Are We Really Getting Faster?

You are here: Home / Coaching / Other than Bolt, Are We Really Getting Faster?
0
SHARES
FacebookTwitter

10 seconds for the 100 meters is the holy grail of sprints, just like the 4 minute mile.  4 laps in one minute.  10 seconds for 100 meters.  Average speed of 10 meters per sec.  It divides evenly making it a nice number.

If you forget about Usain Bolt (though it’s really hard not to), and look at the rest of the world, is technology, better coaching, and better nutrition really helping us run faster?

Or is it lighter and stronger spikes, speed suits, and harder tracks?

Are there more “under the radar” sub 10 performances that are lost in the Lightening Bolt?

I saw these stats in the T&FN Forum (discussed here) which paints the big picture. 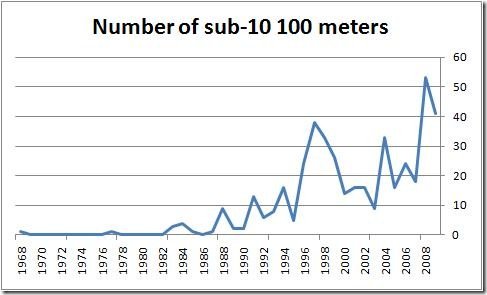 My initial guess are spikes in an Olympic Year, just like other events when everyone steps up to the plate.

But what is accounting for the faster times or fastest top end speed?

If the top end speed of other 100 meter sprinters aren’t improving (with the exception of UB and Tyson Gay), is the rest of the world at a standstill, or worse, still playing catch-up?

We don’t hear of super numbers in the weight room anymore.

Is it a more efficient and faster drive phase?

How about a longer acceleration to maximum velocity?