Imagine a female 100m sprinter who just celebrated her 27th birthday with a PB was 11.48 after 4 years of College running?  I doubt 11.48 will get you a shoe contract.  Maybe a job at Denny’s, but that’s about it.  Would you write her off?

If you haven’t figured it out by the headlines, I am referring to Asafa Powell and Carmelita Jeter.

Just for fun (and out of sheer boredom) I decided to lookup their season bests (SB) and chart them. 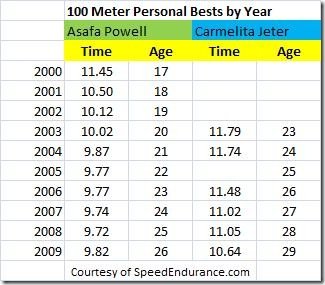 When do you peak?

To determine peak, you have to differentiate between chronological age (the age on your birth certificate) and training age (the number of years of serious training under your belt).

In Carmelita Jeter’s defence, my best 400 meter year was achieved at the age of 29 when I started serious training at the late age of 22 (my Junior year in College).

Is there an “incubation period” for Track and Field before you expose the true potential?

Youth and Junior athletes can see rapid improvements.  We’ve all seen Usain Bolt’s well documented progression in the 200 meters as a child.

It’s acceptable to think a “teenager” (or Junior) will improve once their physical body matures in height and muscle mass.  Weight training definitely helps.  The average layman calls it “filling out”.  Guys Geezers my age refer to “filling out” as waist size!

Others, like most athletes, there is an incubation period where you stagnate, then one day all the pieces fit together.  Loren Seagrave starts off all his lectures with an analogy of a particular Asian tree that doesn’t grow for years before exploding to massive heights.

Of course, once you reach to your “peak” (if you want to call it that), the results comes in thin slices as long as the injury bug doesn’t hurt you.

For Asafa Powell, this is the first time in his career he hasn’t set a personal best.  Same for Maurice Green, who dominated the 100 meters during his tenure:  once he got injured, he never could keep the number one spot.

So when looking at the recent results of Carmelita Jeter, in particular her age as she’s turning 30 this November, one has to wonder what kind of training she is doing.  Was she always talented with the injury bug?

Did someone simply removed the obstacles so her true potential will shine?  (though a legal 10.64 is more like a blazing sun, comet, and meteorite shower all in one)

What was the breakthrough other than a coaching change, drug allegations aside?