I mentioned the previous USATF SuperClinic in the article on Dwayne Miller, LaShawn Merrit’s coach.

Among the wealth of information provided at this clinic was a lecture and handout from Tom Tellez.

Tom Tellez requires no introduction… you can read the article Sprinting: A Biomechanical Approach Part 1 (Part 2 is here) for a detailed look at his coaching concepts and philosophy.

His handout from the clinic (PDF) is pretty sketchy, as if it has been photocopied over and over, but the overall picture of the 5 phases of the 100m sprint remains clear.

In his handout, he charts the 5 phases and the “percent contribution” to the total race. 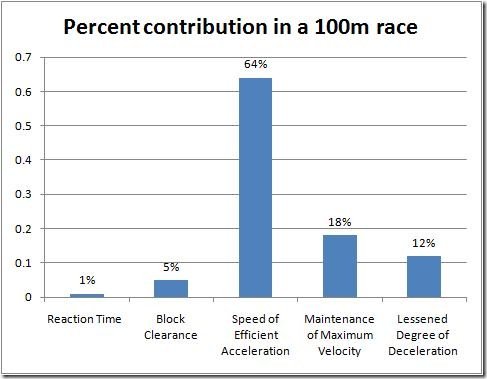 Looking at this chart, it’s no wonder why sprint coaches elect to focus on speed and acceleration work.   But this doesn’t show the whole picture as one component can severely affect the next component.  For example, proper block clearance sets up for proper speed of efficient acceleration.

Or, if you put too much energy and focus on the speed and acceleration phase, you will pay the price and substantially increase your deceleration phase (instead of lessened).

Reaction time is measured by the time taken from the firing of the gun to the first muscular reaction performed by the sprinter.

A bad reaction time will produce a very different 100 meter race pattern with the sprinter rushing through the next phases!

Here is the video on how I practice reaction time.

1) You need proper biomechanics in the starting position in order to generate the greatest power to overcome inertia.

2)  The greater the force applied in driving from the starting blocks by the sprinter, the greater the initial velocity produced.

The block clearance phase sets you up for the next phase.

In the 40 yard dash, the athlete accelerates to maximum velocity in as short a time as possible. This also applies for the 100 meters.

The word “optimal” comes to mind, where an effective acceleration phase can produce the highest maximum velocity.

Optimizing is a popular word here.

An optimal combination of stride rate, stride length and ground contact time will produce the highest top end speed.  This topic has been discussed at lengths on this Blog.

As far as posture goes, the sprinter will be in a full upright position during this phase.

The sprinters’ ground contact time increases with fatigue.  We’ve seen that on the article Ground Contact Time, Stride Length and Fatigue in the 400m.

Staying relaxed, and “staying tall” with a high vertical displacement are common terms.  But a lot of coaches neglect the importance (and biomechanics) of the arms and hands.  Arm action is just as important as the legs.

In John Smith’s perfect world, he would eliminate the Negative Acceleration Phase or Deceleration.  More on that later.