This is part 1 of 2 from my recent visit to the Bay Area, California

A trip to Silicon Valley wouldn’t be complete without a visit to San José State University.

I had two things on my agenda.  Visit the Tommie Smith – John Carlos 23 foot statute, and visit the old Track and Field facility, otherwise known as Winter Field (after legendary coach Bud Winter)

Tommie Smith and John Carlos won Gold and Bronze at the Olympics on October 16, 1968 in Mexico City.  37 years later, they unveiled a statue between Clark Hall and Tower Hall at the SJSU Campus.  You can’t miss it.

The sculpture depicts the pivotal moment in history when Smith and Carlos took a stand for human rights on the victory podium at the Olympics.  It was a “silent protest” that was seen around the world, hence the book title for Smith, not Black Power.

The statue is made from hand-cut ceramic tiles and modeled in fiber glass.  Their heads and arms are cast in bronze.

The second place podium remains empty for visitors to “take a stand” for human rights (at least, that was my interpretation).

Other than the symbolic black glove and walking bare feet with a Puma shoe on the side, the other controversial object was the human rights badge seen by Carlos and Peter Norman of Australia, who finished second.

Norman quoted he was disgusted by his own country’s government’s White Australia policy, which ended in 1975, seven years after this protest.  Needless to say, he was not popular with Australia’s Olympic authorities nor the Australian media.  Kudos to Peter Norman for taking a stand.

See also  The Sad State of the 100 meter Sprints

Below are some of the photos. 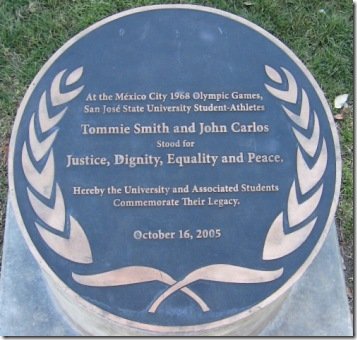 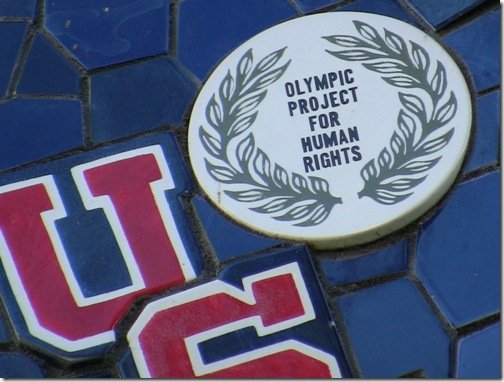