“I wanted to push the envelope with a shoe that meets the demands of my style of play,” Bryant said. “The Kobe V is lighter, lower and more stable. Nike has done it again.” 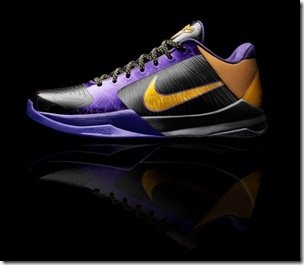 The initial inspiration for Kobe’s low-profile shoe came from an unexpected place: the soccer field. “I watch a lot of soccer and have seen how the best footballers in the world make sharp cuts at top speed in lightweight, low-cut footwear,” Bryant said. “The demands they make on their feet and ankles aren’t that different from what I’m doing on the court, yet nobody assumes they should play in high tops.”

With Bryant’s observation as inspiration, the Nike Sports Research Lab conducted hundreds of hours of testing to create a low-profile shoe that did not compromise stability or lockdown. By modifying the medial arch and sculpting the external heel counter, Nike researchers created a shoe with exceptional performance that moves with the foot and allows for multi-directional cutting. An enhanced outrigger provides lateral stability, while the de-coupled heel maximizes contact surface. The shoe also features a glass/carbon fiber weave shank plate for mid-foot control and rigidity.

“The journey from a high-top to a low-top basketball shoe is far more complex than simply cutting off the ankle collar, as we demonstrated with the Nike Zoom Kobe IV,” said Matt Nurse, Senior Researcher with the Nike Sports Research Lab. “With the Kobe V we constructed an even lighter-weight support system that provides superior, one-to-one lockdown while moving with the foot, not against it.”

Building off the success of the Nike Zoom Kobe IV, Nike Performance Footwear Creative Director Eric Avar wanted to further reduce the weight of the shoe while still enhancing support and stability.

“For the Kobe V, we started with the science and performance elements and built from there,” Avar said. “We wanted this shoe to be a true reflection of his game and persona. As Kobe continues to evolve as an athlete, so will the footwear we create for him.”

The Nike Zoom Kobe V also features a lighter, stronger version of Nike’s innovative Flywire technology, that’s strategically placed to perform like synthetic tendons while cradling the foot like a second skin. The shoe’s overlays were bonded with heat welding, which is lighter, more consistent, and less abrasive than traditional stitching. Nike Zoom units in the heel and forefoot, as well as lightweight Phylon-injected midsole, provide a cushioning system that reduces pounding without adding bulk or weight.

Bryant’s input and inspiration was also instrumental in shaping the aesthetics of the Nike Zoom Kobe V. Avar and the design team in Nike’s Innovation Kitchen incorporated aspects of Bryant’s game and personality into every detail in the shoe. The heartbeat traction pattern on the outsole is inspired by the heart, passion and self-described “maniacal will” Bryant brings to the court. The dot-matrix symbol on the front edge of the outsole – found throughout Bryant’s footwear and apparel product this season — represents a codified language sequence. Nike will offer clues to deciphering its meaning throughout the season.

The Nike Zoom Kobe V will be available first online with a unique Nike iD retail campaign launching December 26, 2009. A broader global brick and mortar retail launch will occur January 1, 2010 in China and January 16, 2010 throughout the U.S., Canada and Europe.