Whenever I go to a party and people discover I coach Track and Field, non-athletes always ask for free advice on how to get a six pack.

Usually I give a smart-ass response in 4 words:  eat less, exercise more.

But when I give personal training advice to a friend on how to strengthen the abs and core, I usually start with my classic 2-pause-4 workouts.  I didn’t invent this, as I learned this technique from my early days at Nautilus Plus in Montreal.

It goes like this:  Lie on your back on the ground using a mat.  Bend knees 90 degrees.  Place hands on thighs.  Now go up and EXHALE in a two-count (2 seconds) until your hands reach your knees.  Pause 1 SECOND.  Then EXHALE and return back to the original position on a four-count (4 seconds).

The last thing I want is to further damage a lower back problem.

This should strengthen weak abs, and along with hamstring and lower back stretches & mobility exercises, your lower back pains will be reduced, if not eliminated.

The above example is a combination of concentric (2), isometric (1) , and eccentric (4) exercise.

The Plank and Side Plank 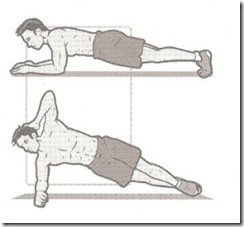 Now one of the best isometric exercise is as follows.

For myself, I end a workout with a simple Ab-core torso exercise, called the plank and side plank (see image on left)

See also  Kick in the Butt

If you need a challenge to make this tougher, you can go longer in duration, or put your feet or legs on a Swiss Physio Ball or a Bosu ball.

Another isometric exercise is called the Hundred Breaths Exercise, from Pilates.  Lee Evans does a similar exercise called “V-ups” in his book but with less focus on isometrics.

I personally do not do these, but you can always use your good friend Google to find out more if you are interested.

Taking a good thing too far?

As a Canadian, we are generally considered “nice and polite” but now I’ll drop my hockey gloves and start ranting.

There’s been a lot of discussion from various forums from a guy named Barry Ross.  I never met him, and I’m sure he’s a nice guy but the point I’m trying to make is to discuss his claim for using isometrics as the best exercise.  It’s okay to disagree, but do we have to be so disagreeable? (to quote from John Wooden)

I’m not disputing his claims or trying to trash his methods.. that’s not my point.  I just want to dissect the isometric part for abs.

The mid-torso muscles are stabilizers with the primary function of maximizing trunk stability.

Isometric or slow isotonic training in a range of non-specific and sprinting specific body positions offers a much better workout for the mid-torso musculature.  <NOTE: He recommends 2 exercises ab-45, ob-45… you can guess the workout intelligently by the name ab and obliques at 45 degrees)

My biggest problem with isometrics is that they only strengthen one particular position.  You need strength throughout the entire range of movement.

Isometrics for Abs are great for boxers or UFC-MMA fighters athletes for taking a punch in the abs.

Just make sure you have a comprehensive program for you ab and core work.  Yes, some exercises like the classic crunches will work your hip flexors, but don’t tell me you don’t need hip flexors in the last 100 meters of your 400?

I feel you need all 3 types of exercise (concentric, isometric and eccentric) with varying degrees of difficulty and volume.

And remember you need both strength and strength endurance.  Power cleans and dead lifts will definitely give your hip flexors strength.  I’ll discuss dead lifts and cleans in an upcoming article.