This article is aimed for readers born before 1960 when running 100 yards was the norm, especially in the USA.

There has been a lot of buzz on how fast Usain Bolt could run a 40 yard dash, which were fuelled by the Chris Johnson’s recent 40 yard challenge to determine the World’s Fastest Man.  (Shades of Donovan Bailey and Michael Johnson circa 1997 come to mind.  You can’t compare a 100m to 200m, let alone a 40 yard to a 100m)

Based on these results, in theory, you could extrapolate your 100 yard dash time by adding 0.8 seconds if you were an elite sprinter.  Then again, some 100 meter races are won and lost during those last 8.5 meters!

Of course, a slower 100 yard dash time would require a larger extrapolation (0.9?) due to the drop in top end speed.  There is no fixed rule.

Usain Bolt and the 100 Yard dash 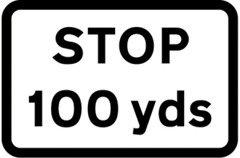 You can argue how fast John Carlos’ 9.1 would be if he had better spikes, better training, and faster tracks, but I’ll save that for the documentary.

On the next WC, I would like to see the IAAF setup 2 finish lines with the first one at 91.44 meters.

Why not?  Usain is credited for the 150 meter World Record.