February is Black History Month in the USA.

In the world of coaching and African Americans, I will honor this post to the memory of Stan Wright.  I was 9 years old when I watched the Munich Olympics in 1972.  I had no idea what was going on in terms of the hostage taking, but I do remember several events, namely the 800 meters (Wottle), Marathon (Shorter) and of course, the unfortunate 100 meters.

Stan Wright’s first distinction was in1966,  when he became the first black head coach of a United States Track & Field team for two dual meets against Poland and the Soviet Union, held in Los Angeles. 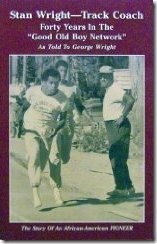 On the book cover (left), you can see Coach Wright practicing 4x400m relay passes, using the upsweep blind pass prior to the Mexico City Olympics in 1968.  Who uses blind passes for the 4×400 today?  Revolutionary, if you ask me.

Wright also had to deal with the whole Tommie Smith and John Carlos’ Black Power salute.

Sadly, he will forever be remembered for the disqualification of two sprinters, Eddie Hart and Rey Robinson, who missed their quarter final races in 1972.

Lee Evans, who was on the 4×400 relay team, did a valiant effort to sprint back to the Athlete’s Village to inform them of the schedule change.

Hart and Robinson missed their races, but Robert Taylor got there less than a minute before his race, stretched twice and finished second, advancing to the semi-finals.  Taylor, who died in 2007, would later win the bronze, and he was considered the “3rd string” next to favourites Hart and Robinson.  The latter would have given Borzov a run for the Gold (here is the video).

To create a happy ending, United States went on to win the gold medal in the 4×100-meter relay.  But I’m sure it was bittersweet.

In fact, Wright did check with the German officials the morning of the heats, and they confirmed his old schedule was correct.  But he should have double checked.  And so should the athletes.

Ever since that incident, I always double check and triple check my schedule, and urge all the athletes to check with their schedule on their own.  The biggest headache is when they cancel the heats for a straight final.  Please don’t phone from home and check.  Come to the track and hang out.

In 1993, he was elected to the National Track and Field Hall of Fame

Click here for the Autobiography of Stan Wright, Track Coach: Forty Years in the "Good Old Boy Network" – The Story of an African-American Pioneer

.   There were a few copies on Track and Field News, but my last search was futile.  The book is now out of print, but you can still find it at Amazon or any rare on-line bookstore.