Here in Italy, we love our football or CALCIO.

After attending a few games, I started to see some patterns.  On the clothing side, a lot of spectators wear Italian made KAPPA.  You can’t miss their logo.

But for footwear among the players, it’s a toss up between the Nike Mercurial Vapor Superfly versus the Adidas F50 Soccer Football cleats.

Both are good shoes, or “boots”, and it’s all a matter of preference among brand names and loyalty.  Last year’s press release for the Nike Mercurial Vapor Superfly can be found here.

Here are some pros and cons between the boots.  The price are comparable, so that should not be an issue, unless you find a huge discount or deals.  If you do, please let me know! 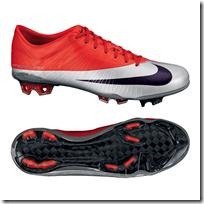 Endorsed by Ronaldo, Drogba, and Ibrahimovic

Durability on older models were questionable after incidents of Luis Fabiano and Didier Drogba boots fell apart during a game.

No lace cover, which cuts down on weight and supposedly helps with accuracy when striking the ball.

In their own words:

Detachable and interchangeable studs and cleats.

In their own words:

Get creative and tune up your game with the adidas F50.9 TUNIT soccer shoe. Combine the sleek, new TUNIT adiGrip® synthetic microfiber upper for all weather touch, with your choice of chassis and stud set to create a soccer boot perfectly tuned to your skills. Modular technology lets your customize your shoe to your game. The innovative lace cover gives you increased kicking area and the AgION antimicrobial lining stops odors, bacterial and fungal growth. A new exchangeable TUNIT Standard Chassis offers premium support and cushioning, while the new exchangeable pre-molded TUNIT Standard Insock adds support and comfort. The TraXion™ grip outsole is solid on firm natural surfaces and comes with a set of additional SG cleats and HG studs. Customize your game with the adidas F50.9 TUNIT soccer boot. Wt. 10.8 oz.