“The start “ has been the center of controversy since the beginning of Track and Field.

Over 50 years ago, it was Armin Hary of Germany and his lightning quick starts and acceleration. In the days before pressure pads were installed on the blocks, several athletes accused him of jumping or anticipating the gun.

Peter Radford of Great Britain was one of them (and his famous diet will shock today’s standards).

In an article from the Guardian, Peter Radford’s accusations were incorrect:

Walsall-born Radford, now 70 and a retired professor of sports science, didn’t start well in Rome. "I looked up after the first 10 metres and counted the backs," he tells OSM. But he had made a "bombshell" realisation on the starting line, working out how Hary engineered his quick getaways.

"He’d wait until we were all on our fingertips in the set position. Then he’d take up his place, pause momentarily – and run. He might get caught with a false start, but he might also get away with it." Radford caught up with the field and won bronze, but the race was the last of its kind.

"Afterwards the IAAF said that if the sprinter didn’t come to position on command, he’d get a false start. The ruse wasn’t open to anybody to use again."

I wrote about Armin Hary in past articles, and his first 10.0 100 meter race ever recorded.

His 100m race from the Rome 1960 Olympics, including all the false starts, can be found on YouTube.

In both races, he does not appear to pop up late.  Or does he?

With all the complaints against him, Hary underwent testing, and was found to have a reaction time 3 times faster than normal, probably around 40-50ms (0.04 sec), compared to the average person of 132ms (0.132 sec) 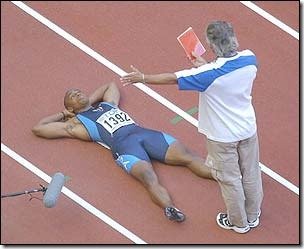 We witnessed in the 2003 World Championships how Jon Drummond registered the false start, causing a disqualification when how someone else visually twitched first as seen on instant replay television.

We also saw Lindford Christie accuse Ben Johnson of jumping the gun back in 1988, and then push for the IAAF 0.100 second false rule. Ironically, that new rule got him disqualified in 1996. (no matter, Donovan Bailey still would have won the Gold medal). Lindford stated in his defense: if you already have a false start under your belt, sitting back waiting for the gun will do you no good.  You got to get aggressive, even if it means a DQ. And that’s exactly what happened.

Unless, of course, you are afraid to get drug tested.   Like false starting out of the 100 meters in a Decathlon where your 3rd false start, not second, gets you disqualified (** cough cough Jurgen Hingston 1988 Olympics cough cough **)

Should we change the 0.100 sec reaction time starting rule?

Part 2 tomorrow: Is the IAAF rethinking the starting rule of 0.100 sec reaction time?