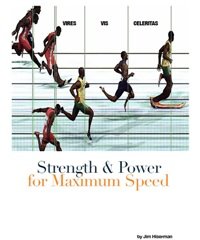 This article is guest blogged by Jim Hiserman, author of the books Program Design Method for Sprints & Hurdle Training and Strength and Power for Maximum Speed

Part 1 can be found here.

In order for the planning of successful training programs aimed at improvement in the 400 meters, coaches must not only know the compromises in sprint mechanics between the short and long sprint due to the fatigue factor, but also the training methods that best develop the mechanical efficiency required of the longer sprint.

Dr. Mann points to the fact that, through decreasing the braking forces during each touchdown, the 400 runner diminishes the fatigue-producing, pounding impact while also cutting down on the effort required to regain the forward velocity lost during touchdown. It is also important to emphasize greater horizontal foot speed at touchdown because this “sets up” the 400 runner with a shorter horizontal foot distance from the body’s center during the early portions of the race.

The horizontal foot distance at touchdown is one of the compromises in mechanics between the short and long sprints. 400 runners contact the ground around 20% farther in front of the body’s center of mass compared to 100 runners. This allows for the 400 runners to produce greater vertical velocity, which is not only critical to performance, but also more energy efficient.

Fatigue, during the late stages of the 400, will result in forcing the sprinter to increase the horizontal foot distance and rely on Explosive Strength Endurance to try and maintain the vertical velocity that is lost due to the braking effects of the foot landing further in front of the body’s center. It must be pointed out that this requires greater levels of Explosive Strength Endurance during the later stages of the 400 when fatigue is greatest.

Another compromise in mechanics forced by the fatigue that results in the 400 is the leg extension at takeoff during fatigue. Comparing extension at takeoff in the non-fatigued state with the fatigued state showed about 8 degrees more extension in the fatigued state according to Mann’s analysis (The Mechanics of Sprinting and Hurdling, page 107). This increase in ground contact time, which decreases stride rate, is a compromise necessary to improve efficiency of the overall performance. Again, this places a premium on Explosive Strength Endurance to counteract the loss of horizontal velocity.

Critical factors that determine successful performance at 400 meters include: 1) capacity to apply large amounts of explosive strength in a properly timed manner, 2) ability to compromise the ground contact times and horizontal foot distances in order to be more efficient, 3) apply the high levels of explosive strength in a manner that elicits an optimal performance through application of a high stride rate and medium stride length.

As mentioned at the beginning of this article, proper training for 400 meters requires the teaching of proper sprint mechanics (in this case the compromised sprint mechanics required by 400 meter sprinting) along with Energy System and Strength and Power Training Plans that include a frequent and relevant testing protocol to insure that timely adjustments to training are made.

Part 3 to be continued…

Jim Hiserman is the author of the books Program Design Method for Sprints & Hurdle Training and Strength and Power for Maximum Speed.  Other published articles on this site include: