Chris Brown: How to Run an Indoor 400 Meters

You are here: Home / 400 meters / Chris Brown: How to Run an Indoor 400 Meters
8
SHARES
FacebookTwitter

The 2010 World Indoor Championships at Doha was a clinic on how to run an indoor 400 meters.  Of course, that clinic was held by Chris Brown of Bahamas in a “slow” 45.96.  He gets out fast, relaxed, and wins the gold medal.

He had one job. 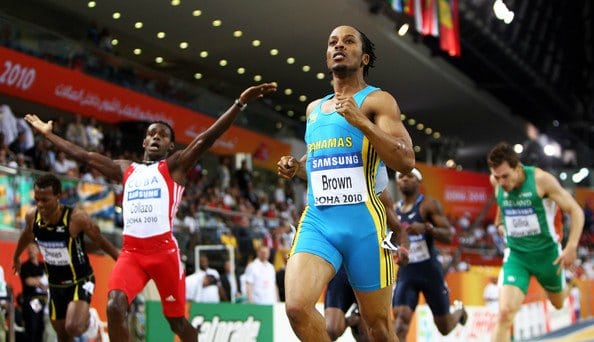 But behind the scenes was another story.

With 75 meters to go, David Gillick tries to pass Bershawn Jackson but Jackson starts swinging wide into lane 2.  You can clearly see in the video that he is stepping on the line of Lane 2.  Gillick sees this opportunity and tries to sneak in lane 1.  Some bumping and shoving occurs between the two which resulted in a Gillick disqualification from rule 163.2 “obstruction”.

Watch the YouTube video below and look at the total disgust and anger in Gillick’s face after he crosses the finish line.

Should Gillick have been DQ’ed?  It looks like Jackson tried to cut back into lane 1 after he realized he was getting passed.