The Men’s adidas Powersprint 2 will be a popular sprint spike for 2010.

If you are familiar with the original adidas Powersprint, this is the next generation up. I still race in my original Black/Red Powersprint models.

Just like the Demolisher series in post-2004 Athens, the Powersprint 2 were set to be released in post-2008 Beijing, but were only made available to the public by 2009.  If you recall, the DeMOlisher was made famous by Maurice Green (and his fire extinguisher shenanigans at the LA Carson meet) .  2010 will be the sprint spike’s full season.

Both the Demolisher 2 and the Powersprint 2 had a suggested retail price tag at over $180 USD, but you can find them now for under $80.  The 3rd sprint spike from Adidas are the Adistar series at a slightly lower cost which I use for training.  I keep my Powersprint for time trials and racing only.

The Powersprint 2 is fairly light at 7.2 oz

The lace cover is handy as you won’t have to worry about tripping over your shoe laces!

There are a couple of features to watch out for, which may be good or bad depending on your taste and running mechanics. 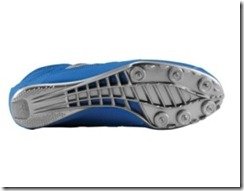 It is available in one colour and that’s Signal Blue with Metallic Silver.  The Black/Orange model is hard to come by and possibly discontinued.

The spike plate is a full length one, which may make the shoe a bit stiff.   I find that after 1 season of training in spikes, I crack the spike plate. (I am at least 185 lbs or 84 kg)  So you may want to reserve a pair for racing only.

Why the rigid spike plate?  According to Adidas, the goal with the DeMOlisher 2 as well as Powersprint 2 was to create a spike plate rigid enough to keep a powerful sprinter like Maurice Greene on his ball of the foot throughout the entire foot strike and push-off.  Keeping the weight of the shoe to a minimum without the expense of falling apart was also another consideration. 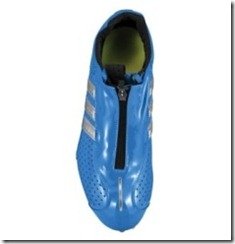 Also, the spike plate only has 6 pins, compared to others with 8 pins (using 4 pins closest to the ball of the foot).

Overall, it’s a great shoe and great looking shoe if you like aqua-marine blue.

If you own this shoe, please post your comments below.