Wayne Collett is most famous for his 1972 Olympic medal presentation “protest” where he won the silver medal behind American teammate Vince Matthews in the 400 meters.  Had John Smith not been injured, we would have seen an American sweep.

The IOC banned Collett and Matthews for life and with John Smith injured, that left Lee Evans, the 1968 Olympic Gold medalist standing alone with no relay to run.  Today, you declare six athletes, not four in a relay pool.

Like a Tibetan monk, Wayne Collett and Tommie Smith’s actions were “peaceful” and did not resort to the use of guns and weapons.  A picture is worth a thousand words.  You may argue that these types of protests do not belong in a sporting arena, especially the Olympics. 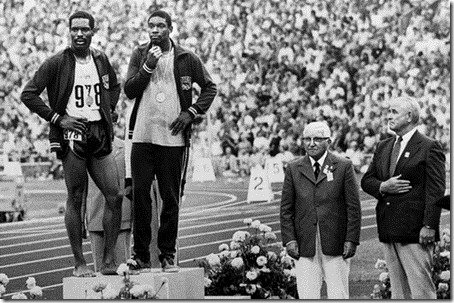 He quoted, "I couldn’t stand there and sing the words because I don’t believe they’re true. I wish they were. I believe we have the potential to have a beautiful country, but I don’t think we do."

A lot of people don’t realize he was also a world class 400 meter (440 yard) hurdler.  He was the Angelo Taylor or Kerron Clement back then, capable of running both events.

But the reason why I respected Wayne Collett is because he did something after his short lived track “career”.  (He had no choice, right?)

He went to school.

And school he did.

A lot of young athletes don’t realize that very few athletes go on after college to earn a profession in Track and Field.

The message?  Don’t be stupid, stay in school.