Tyree Washington has a special place in my books which is why I connected with him on Facebook.

Outside of track, he went through a lot of personal hardship.  More than I could ever imagined. 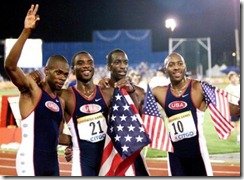 On the track, he was destined to be the “next Michael Johnson” in the post-Michael Johnson era.  Those are big (golden) shoes to fill!

More recently, he lost the 4×400 World Record because of Antonio Pettigrew’s PED confession.  Just because you don’t have 3 or 4 sub 44 second quarter milers doesn’t mean you can’t break the world record!

He missed the Olympic Games in 2000, but bounced back in 2003 with a World Indoor title, and a USA Outdoor championship title in 44.33.  He finished 2nd at the IAAF Paris World Championships to Jerome Young, but was later upgraded to Gold.  His 4x400m relay Gold was also stripped because of PED use from one of his teammates.

You can strip all the medals in the world from this guy, but he keeps on bouncing back.  Even outside the track.

Here is the link to the radio show, or simply use the built in player below.