There will be a ceremony naming Harry Jerome as a Person of National Historical Significance on Saturday May 15th at 9:00 AM at the Harry Jerome statue located on the Stanley Park Seawall (see photo below).  As well, they will also name the Canadian Landmark in his honour.

Other famous runners inducted are Terry Fox and 1907 Boston Marathon winner Tom Longboat.  With the exception of Prime Ministers, a person is eligible to be listed 25 years after their death.

SIDENOTE: If you look close enough at the photo, you can see my old office building in the background!

Who the Heck is Harry Jerome? 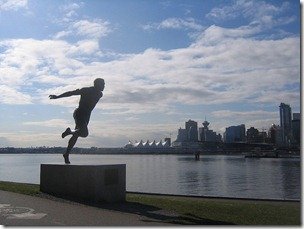 Harry Winston Jerome was born in 1940 in Prince Albert, Saskatchewan, Canada, which has a population of less than 35,000. Prince Albert is approximately 600 miles north of Bismarck, North Dakota.

The town is better know for their flax seed farms with its cold brutal winters.

Harry Jerome attended the University of Oregon on a track scholarship from 1960 to 1964.  Under Bill Bowerman’s tenure, he set or equaled 7 world records:

Despite the fame and recognition he achieved as a world class sprinter in Canada (Percy Williams from the 1920’s was the previous well known hero, also from Vancouver), he always felt he let everyone down with his Olympic performances in Rome 1960 and Tokyo 1964.  He injured himself in Rome and won a bronze in Tokyo behind Bob Hayes.

The media was quite harsh on him, as he recalls leading up to the 1962 Commonwealth Games in Perth, Australia:

"They have never let me forget that I was a failure at Rome," he said. "Although I pulled a leg muscle in the preliminary heats, some of my critics led everyone to believe I choked up. It has been a hard dose of medicine for me to take.

"I must win here, and I must win in the Olympics in Tokyo to get out from under this cloud … I feel I must win a medal to prove myself. My aim is to win the 100, and then I will feel I have got over a hump."

“I tried so hard, so damn hard," Jerome said. "Just when everything was going so well … my training, my school … I thought I was in perfect shape. I was trying to beat Antao. When I saw him ahead, my whole edge went off, and I sort of collapsed. There was no real pain. I just tried too hard. I don’t think I pulled a muscle. He (Antao) got off the blocks real fine. There was just him and me. I tried to catch him but just couldn’t make it."

Jerome said he thought he could have taken a silver medal if he had hung on. "But my whole heart went out. I was aiming only for the gold."

Harry Jerome died in 1982 at the age of 42.  28 years later, he will be named as a Person of National Historical Significance.