You are here: Home / Coaching / Asafa Powell – How to Do a 4 Point Start without Starting Blocks
19
SHARES
FacebookTwitter

This is a follow up article on Time Trials in Training: Run Alone or in a Group?

My early days with Coach Dennis Barrett were always in a group to simulate a race condition.  Some of us didn’t use starting blocks because our Club only owned two!  As an Alan Wells fan, I would say “screw it” and get down on all fours on the track.

Some sprinters are psychologically dependent with starting blocks.  With proper spikes and synthetic tracks, I feel you can still get an effective start without them.  And my indoor 400 meter Dartmouth Relays proved it, as you are not allowed to use blocks on the oval events.

In the video, note how the sprinters go down on all fours with NO BLOCKS!  Who says you need blocks to run fast?  Especially for a 300 or 400 meters, though you should always run the first 5 or 7 steps the same way whether it’s an indoor 60m sprint or 400 meter dash.

Also take a look at Asafa Powell’s foot spacing WITHOUT BLOCKS (image below, left), which are wider than normal with blocks (image below, right).

Also note how he is preparing for a 3 point start initially as if he is doing a 40 yard dash, and then gets down on all fours in a stable position.

According to Bud Winter’s So You Want to be a Sprinter (to be re-released any day now), his Speed City research shows you will get off the blocks faster with this style of a start, but you will lose your advantage after first 10 meters.

Bud’s other book, The Rocket Sprint Start (to be re-released later this summer) goes in greater detail on the findings of Armin Hary’s incredible start and how his block setup differs than conventional starts during the late 50’s and early 60’s

Regardless, his first step shows great form despite the lack of blocks. 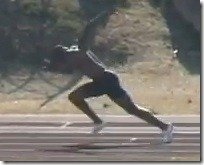 Here is that video again on Youtube in case you missed it.