John Wooden and Bud Winter on Relaxing and Winning

You are here: Home / Other Sports / Basketball / John Wooden and Bud Winter on Relaxing and Winning
5
SHARES
FacebookTwitter

Anyone who watches Usain Bolt before any race will notice he is loose and confident before every race.  In a big pressure race of the Olympics or World Championships, he’s playing and smiling to the crowd, while others are focused, staring at the finish line or staring at their belly buttons.

Asafa Powell, who is known as a “choker” at championship meets, changed his usual quiet focused demeanor to Be Like Bolt in 2009 Berlin.  The result?  A 3rd place 9.84 Season Best.  It was a lot better than his 2004 or 2008 Olympic showing, or his 2007 Osaka 3rd place finish when he eased up to 3rd after realizing he wasn’t going to win. 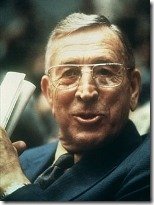 Rewind back a couple of decades and John Wooden is unmistakably the top coach in NCAA Basketball.  John Wooden died 132 days short of his 100th birthday on June 4th, 2010.

His stats speak for themselves.  Wooden won ten NCAA national championships in a 12-year period while at UCLA, had a record winning streak of 88 games and four perfect 30–0 seasons.

Beyond that, he revolutionized the art of Coaching with his “Pyramid of Success", being a role model, and core human values.

The question is, how do you win without the pressure?   How do you calm the nerves or adrenaline before the big race?

Relaxation is the Key

Bud Winter had a chance to interview John Wooden in his book Relax and Win.

Below is an excerpt of that chapter, which applies to any sport, including the 100 meter sprint.

Q. Some athletes are born loose and confident and let nothing bother them. However, they come along once in a long, long time. Do you think coaches would welcome a program of relaxation with which you could teach anyone to relax with good, even amazing, results?

A. All coaches would be extremely interested in that. It wouldn’t be easy, however, because of the difference in people. Every individual is different and what might work for one might not work of another.

Q. Did you “pep-talk” your basketball players before a game? What about the men who were psyched up already? Did you try to calm them down to keep them from psyching themselves out?

A. No, I never believed in “pep” talks. I believed in preparation. I believe failing to prepare is preparing to fail. No “pep” talk in the world can take care of it if you fail to prepare. The importance of the game itself would cause the players to rise the occasion. As far as players completely psyching themselves out, I believe I was very fortunate in that I seldom had this. I never wanted players to take themselves too seriously. I just wanted them to do the best they could and then they’ll have nothing to feel sorry about. If they are good enough, the score will be to their liking, and if not, it will be exactly as it should be.

Q. How do you explain “hot” nights and “cold” nights?

A. Well, there are many reasons for that phenomenon. It might be the physical features of the place in which you are playing. It might be the lighting. It might be the floor. It might be the backboard. There are many things that enter into “hot” and “cold” nights. When we think of this, we generally mean shooting, because defense can be fairly consistent. But offense can be inconsistent. The floor might be a little dirty and cause the ball to get a little dirty and you will not handle it as well. The ball itself might be slippery. You might not be feeling well. There might be specific reasons for each individual not doing as well as he can. Any or all of these things could cause tension and he might not have a good night and his shooting percentage might not be as good as it could be.

To read the entire chapter of the book Relax and Win, and to receive the latest news on Bud Winter’s re-release of his 5 famous books, sign up for the newsletter below.

See also  What is the RAST Test for Speed Endurance?