Core Muscle Training: How much is Enough?

You are here: Home / Training / Abs & Core / Core Muscle Training: How much is Enough?
4
SHARES
FacebookTwitter

This is a continuation of a previous article titled Isometrics and Ab Core Exercises – The Hidden Secret?

A recent article in the Guardian quoted Sanya Richards doing 1500 sit-ups per day:

As an elite athlete who is known for doing 1,500 abdominal crunches per day, Richards-Ross should not have been a bride who needed to worry about her weight

First, I think the term sit-ups and crunches are really a misnomer.   I think the journalist isn’t aware of the proper lingo.  I like to use the terms “core muscles” or “trunk muscles”.

I really can’t imagine a world class athlete under Clyde Hart would prescribe 1500 regular crunches per day.  Seriously.  Unless she wants uber-hip flexors?  If that was the case, I’d recommend standing exercises (more specific) and use resistance bands.

I’ve been to several Strength & Conditioning conferences so I have enough material to fill several binders.  I can’t help it, because I am the camera man!   The name that pops up time and time again is Stuart McGill.  Two of his landmark books are Ultimate Back Fitness and Performance

and Low Back Disorders, Second Edition

(CAVEAT: They are not cheap!)

All I care about is #3.  At least for now.  Maybe when I’m old I’ll worry about #2.  And I’m not in a position to clinically diagnose back problems to safely help those in #1. 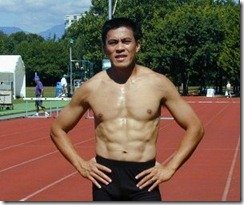 I don’t go overboard on the latest craze in ab or core exercise.  Motivation to run faster is my biggest decision maker.

In 1997 after injuring my hamstring, I went to my physio Alex McKechnie at Burnaby 8 Rinks  (Yes, in Canada, hockey rules!).  The name may sound familiar as he moved to Los Angeles and became Shaquille O’Neal’s personal trainer.  He’s now famous for his Core-X System.  He performed an analysis on me and found my core extremely weak for a big strong guy.

Alex is famous for his high intensity loading types of core training with a variety of gadgets like swiss balls and resistance bands.  All of a sudden, everyone was doing them.  The late 90’s was also a boom period for several professional athletes (i.e. mostly basketball and hockey players) with abdominal strains and injuries.  Too much may be a bad thing.  My opinion, that’s all.

Shortly after, I attended a Charlie Francis seminar in Southern California in 2001.   Not a big deal for me as I was working in Silicon Valley.  (I love the I-5… or is it the 5?  or is it “5”?  sorry, just a NorCal-SoCal joke)  The Charlie Francis Training System recommended 1000 reps per day, or 6000 a week with low intensity endurance training for the core musculature.

After researching and some trial and error, I believe core training should consist of low intensity endurance training for support and stabilization.

So this is the schedule I like to keep.

The core for a 400 meter sprinter is support and stabilization to the muscles.  We are told to run tall all the time (the ghost of Bud Winter keeps repeating in my head) and what better way than to promote good posture?  Even when sitting in an office chair.

I mentioned Barry Ross as he states in my previous article Isometrics and Ab Core Exercises – The Hidden Secret?:

The mid-torso muscles are stabilizers with the primary function of maximizing trunk stability.  Isometric or slow isotonic training in a range of non-specific and sprinting specific body positions offers a much better workout for the mid-torso musculature

I certainly agree with the first half of that statement, I just don’t agree Isometrics are the ONLY thing, and the word “better” is a pretty strong word.  I do, however, end my workouts with a plank and side planks.

Some Extremes and the Swiss Ball Movement 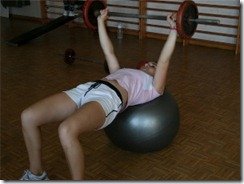 Speaking of office chairs, there are those people who gave up their Herman Miller Aeron chair for a swiss ball at the office.

Yes, the same people who are jacked up on caffeine and eating processed carbs all the time.

As Charlie Francis would say, it’s okay to do bench press, and okay to do swiss ball exercises, but please do NOT do two things at once!

So why do we keep seeing these shortcuts in the gym?  To save time?

The bottom line is if you have access to swiss balls, and you enjoy doing swiss ball exercises, then go ahead.  Same goes with any balance board contraption like the bosu ball.

Just keep the range of motion at a functional level.  No need to train the muscles where no muscle has gone before.

Along with isometric exercises like the plank and side plank, more dynamic movements (like the bird dog) should be incorporated, as well as med ball workouts.  I love med balls because you can easily change the intensity with different weights.  I’ll need another article to go through the various routines and types of med balls.  You can start with forward toss, upward toss, and backwards toss.  The basic three.

For the obliques, there are the wood chop side throws or wood chop side passes.  You can do these alone against a wall (you’ll need a plyo ball that bounces) or get a training partner.

When to do Core Exercises

With the exception of easy Tempo days where I do core during the main workout, core exercises are always done after the workout.

If you do 2 workouts a day, the morning workout is usually a warm-up, stretching, and some core, but not to the point of fatigue or exhaustion.

A good warm up during training camp are med ball tosses on the beach (or grass) for the morning workout.  Simply grab a ball, toss in various ways, jog to the ball, pick it up, toss again.  Go out 10 minutes, then turn around and come back for a total of 20 minutes.  Good for core, conditioning, staying lean, and you enjoy breakfast more.

Because there really is no event that requires pure core strength as an Olympic event.  Don’t get me wrong, core strength is important in doing a gymnastics L-sit position on the rings.  Devices in the weight room have at least the lower back support for stabilization to do leg raises!

If you really want to test of your core strength, do the Olympic snatch and report back your numbers (or cleans to a certain extent).

If you look at my abs, I could easily promote a cheesy gadget for abdominals and tell you this is how I got my abs (see ad on left).  While I’m at it, I’ll tell you how to make four easy payments of $9.95 like a Ron Popeil infomercial.

But that’s simply not true.

If I had to advocate 2 products, number 1 would be an exercise mat (or towel if you workout on grass surfaces).

Number 2 is a med ball or plyo ball.

And get to work.