Can deep breathing exercises be used to relax or calm pre-race jitters?

The answer is yes, as I’ve had several good tips over the years from several people, so I will give credit where credit is due.

In my early days of the 400m, I would get so nervous that “belly breathing” was the key to keep me calm and relaxed.

On another note, deep breathing exercises can also be used to gain more energy instead of heading for the coffee pot at the office!

The idea is simple… you deep breathe, hold, and exhale. How long is up to you, but here are some well known techniques:

This was my first time hearing how deep breathing could give me more energy while sleeping less hours.  Okay, I know a lot of you readers are mocking Tony Robbins (his new wife is from Vancouver though) but he does have some good concepts at a very high level.  It’s the sugar coated stories that may make you ill.

His concept is simple.  Along with eating more water based foods like fruits, vegetables and sprouts, he advised deep breathing (inhale) for 8 seconds, hold for 8, then exhale slowly for 8 seconds.  That’s 24 seconds for a full rep.  Rinse and repeat. 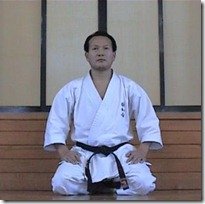 Take a deep, cleansing breath, expanding your belly and keeping your shoulders relaxed, and hold it in for the count of six. Exhale, and repeat twice more. Then breathe normally, and focus your attention on your breathing. As you breathe, inhale through your nose and exhale through your mouth, still expanding your belly rather than moving your shoulders up and down. This deeper breathing is more natural and similar to how babies breathe.

Karate athletes use the seiza position, with legs beneath the buttocks with knees directly in front and hand on the thighs.

If you are trying to relax, try the lotus position and sit cross-legged with palms resting on thighs, palms up.

By that point you are breathing diaphragmatically – taking in deep breaths, filling your stomach first, holding and giving your body a chance to relax.

On Combat: The Psychology and Physiology of Deadly Conflict in War and Peace

Breathing exercises allow us to control our autonomic nervous system. When you inhale, it activates your sympathetic nervous system (fight-flight). When you exhale, you can influence your parasympathetic response (rest-digest). This is how Lamaze breathing was developed – to take the edge off hard contractions during labor.

I found long, slow, forced exhales work well to reduce anxiety and tension. If you get a chance to read Bud Winter’s book – Relax and Win – he talks a lot about breathing exercises for anxiety control and recovery. He had his sprinters perform these exercises. He had originally worked with WWII fighter pilots and taught them how to control their anxiety on missions.

See also  Organic This & That: What Exactly is Organic Food?

Another book that discusses autonomic nervous system control in good detail is “On Combat” by Dave Grossman (coincidentally, the book was given to me by Benicio Del Toro!). Grossman works with Police, SWAT, armed forces, etc. teaching them to deal with violence and anxiety in combat situations. The common technique he teaches is “4 seconds to inhale, hold for 4 seconds, then exhale over 4 seconds.” This is done several times until control is restored.

Dr. Weil claims breathing patters has a remarkable ability to influence and even reprogram  the nervous system.

It’s a complete course of eight breathing exercises that he uses in his own life over the past two decades.

If you’ve done Yoga in the past, you know the importance of breathing, even in a hot smelly sauna doing Bikram Yoga.

While I don’t endorse Dr. Weils products, I am trying to point out the importance of breathing and how it can affect your day to day life including calming pre-race jitters!