Jared Deacon is currently the UKA Development Coach for Sprints and Hurdles at Loughborough High Performance Centre.  I never met Jared, but hopefully I will soon when I go visit fellow Canuck Derek Evely who is the Director at the same venue.

Like several well known coaches, he was an athlete first with a personal best of 45.57 and competed in the 4x400m Great Britain relay team at the Sydney Olympics as well as the Commonwealth Games where he won a Gold for England.

In this interview, Jared discusses his experiences as an athlete and how they have shaped his coaching philosophy. 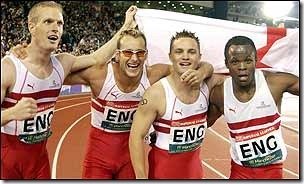 If you run or coach the 400 meters, you’ll definitely enjoy this podcast.

Here are some highlights:

You can listen to the podcast courtesy of UK Athletics coaching site, or use the handy player below.