The ASICS® Japan Lite-Ning’s (get the joke?  Lightning?  where’s Bolt?) latest model is out and somehow they skipped version 2 of this model and came out with version 3.   The manufacturer specifies this spike is ideal for sprint distances up to 400 meters and 110-meter hurdles.  There isn’t much for heel support which is why they don’t recommend it for 400m hurdles.

The ecsaine collar lining, which has a structure resembling natural suede, creates comfortable, soft fit and allows a sockless option.  I prefer being sockless as it’s less weight.

The spike plate is a full length one that’s not too soft nor not too rigid.I recommend a less stiff plate for those who suffer from Achilles tendon injuries. 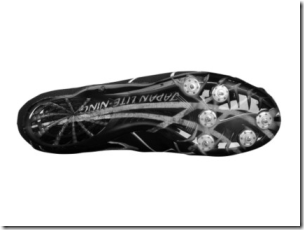 Note how the spike needles are places right under the ball of the foot (when striking the ground) and then the big toe (pushing off the ground).

The newer version is slightly heavier at 5.1 oz or 145 grams (compared to 4.5 oz with their older model). In any case, it is well under the 200 gram preference in choosing “light” spikes.

NOTE: If you buy it from Eastbay (USA), it can only be shipped to US addresses ONLY.  International shipping is not available.

See also  Was Carl Lewis Right about the Long Jump being Pathetic?