4x400m Doha WIC: We Got Hamstrings Blowing Left and Right

The 4x400m meter relay at the 2010 World Indoor Championships (WIC) in Doha were no exception.

Every time you line up for the finals, you have to believe you can win or medal.  It doesn’t matter if you are sandwiched between Usain Bolt and Asafa Powell.  You just have to believe that on your good day, it could be their bad day, and of course, anything goes.

I am sure Christophe Lemaitre had the same sentiments at the Paris 2010 Diamond League. 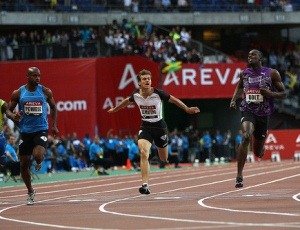 Back to the relay.

In the race, both Andretti Bain of Bahamas and Sanjay Ayre of Jamaica both pull their hamstrings on their respective second legs.  Moreover, USA anchorman Bershawn Jackson pulls him hamstring while leaning for the tape a step too early!

The last time we saw 2 hamstring pulls in the same race was the over-hyped 200 meters at the 2000 USA Olympic Trials finals with Maurice Greene and Michael Johnson.

What’s up with that?  Why so many  hammy pulls?  is March too early for speed work?  Indoor running and tight curves?  Fatigue from too many races with rounds in the individual races and the relay?

Here is the race on YouTube.  The Women’s 4x400m race can be found here.