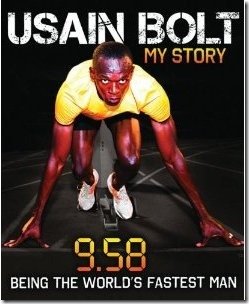 For those lucky enough to live in the UK or Europe, Usain Bolt’s new book My Story: 9.58: Being the World’s Fastest Man

UK and Europe readers, click here for the book

For those living in the rest of the world, including United States and Canada, his book goes on sale Friday Oct 1st.

For the casual reader, there isn’t enough controversy such as Dwain Chamber’s book or Victor Conte’s book.

If you are looking for detailed training plans on his secret track workouts or what he does in the weight room, you won’t find it here.

But if you are a fan of Usain Bolt, then this book is up your alley.

It’s not a quick photomontage (my first thought when he decided to “wrote” a book)… it’s a full 280-page book in which Usain Bolt co-wrote with British sports writer Shaun Custis.

At the time of the book’s writing, Bolt declares his intention to retire from sports in 2016.  However recently, he was quoted retiring from the 100m and 200m after 2012 London to try other events such as the long jump or 400 meters.  By then he would be a double WC (‘09 and ‘11) and double OG Champion.  Being a triple-double gold medalist in 2 events doesn’t motivate him.  He just wants to be a legend!

Note how he never uses the words GOAT or Greatest Of All Time?

In his book, he reveals how he lost his world championship medals while moving to a new home earlier this year.  Sorry buddy, but Jamaica has one of the highest unemployment and murder rates in the world!  Then again, maybe his house is so huge that the medals are misplaced, not lost?

According to a press release, My Story: 9.58: Being the World’s Fastest Man is not just about life on the track. It looks at "the highs and lows, the dedication and sacrifice to get to the top. It’s about fast food, partying, fast cars, dancehall music and that lightning-bolt pose."

But I am impressed how he keeps an eye on his money.  He quotes he reviews his bank statements and personally reviews all his contracts… unlike Sanya Richards-Ross who skips through the 30 pages of legal mumbo jumbo and just signs her name.

He shares that he currently owns six vehicles, all black, his favourite colour.  Interesting… maybe one different car each day of the week to go to practice?

This book is a good read only if you are a big fan of Usain Bolt.  For the secret training tips (other than motivation and inspiration), forget about it.

USA and Canada: Usain Bolt: My Story: 9.58: Being the World’s Fastest Man