You are here: Home / Witty / Commentary / Reiti 100 meters – The Best Race of the Year?
0
SHARES
FacebookTwitter

Lerone Clark of Jamaica, the runner up the the 100 yard race in Ostrava, won the 100 meters at the Commonwealth Games in 10.12.  YouTube video here.

So now with the Commonwealth Games behind us, we can now reflect on the 2010 season.

People talk about how great the Rieti track is for 800 meters, but also for the 100 meters.  Just ask Asafa Powell.

All I can say is Jamaica sure has a stacked 4x100m relay squad with Bolt, Powell, Carter, Frater, Forsythe and now Clark! 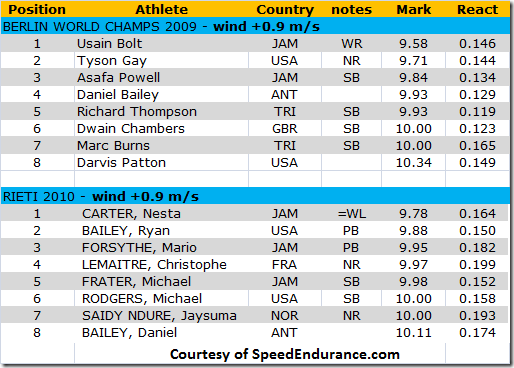 In case you missed it, here is the video on YouTube: