A Day in the Life of Jessica Ennis – British Heptathlete

You are here: Home / Beijing 2008 / A Day in the Life of Jessica Ennis – British Heptathlete
23
SHARES
FacebookTwitter

If you liked yesterday’s daily routine of Tiger Woods, then you’ll enjoy this daily life of Jessica Ennis.

This article is guest blogged by Louise Hudson, co-founder of Sportsister.com 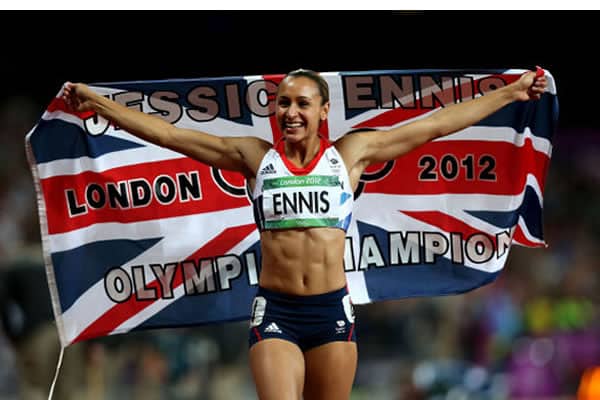 Jessica Ennis:   I’m 22 and have been specializing in the Heptathlon since the age of 13, I run for City of Sheffield and I also run for Trafford Athletics Club as well.

Louise Hudson: Start at the beginning – what time do you get up in the morning?

JE:  I tend to get up about quarter to eight, which feels like a really early start to me. For breakfast I have something fairly normal like cereal, toast and yoghurt.

We get nutritional advice from UK Athletics, we can see someone whenever we need to. You have to be quite strict with what you eat,  I’m quite small anyway and I have never had a weight problem, so it’s more about getting the right amount of food to support your training. I train a lot, so I can eat pretty much what I want – but I d try to eat healthily

LH:  So do you have the same breakfast every day or do you eat something different on competition days?

JE:  I eat something different on competition days. If I’m competing in the afternoon I’ll try to get as much fuel in the morning, so I’ll have cereal, toast, bit of fruit and just try and get as much in as possible, because I probably won’t eat for a few hours after that – And that’s really important on a competition day.

LH:  Talk us through your daytime routine

JE:  I get ready, put all my kit together and then I’ll drive down to the track, and start the session at about 9 o’clock. Then I train for about three hours, but within that there will be some technical work, so its not flat out for all that time.

My coach writes me a program and each day we have a different event to focus on. So on a Monday in the morning I would do a running session and some hurdles and in the afternoon I would do circuits, and some shot putt, it’s all structured to cover each event during the course of the week.

LH:  Is there anything that you do every day?

JE:  I do some form of running every day, but it will never be the same session, it’s always different.

LH:  So  you’ve been training for 3 hours, which is a long time. What happens next?

JE:  I’ll go home, get some lunch, try and have a little bit of a sleep and then I’ll come back down to the track, for about half past 2 – 3 o’clock ready to start my next session.

Lunch depends on what mood I’m in really, it has to be something that I’m going to get a lot of carbohydrates from, so I can burn off the energy in my second session.

I’ll have a sandwich or something similar, I’ve been having a lot of porridge recently.

It fills you and is a slow release of energy, so I’ve been eating quite a bit of that.To drink I like V8 fruit juices. It has eight different fruit and vegetables in, so it counts as a portion of your fruit and veg for the day.

After lunch I have a little sleep, watch a bit of TV or  just chill out and rest a bit, to recover from my first session before heading back down to the track again for another

3 hours. It will generally be technical work, a weights session, or something like that and I finish around six pm.

LH:  And are there other people there training with you, or is it just you and your coach?

JE:  In the morning sessions it’s generally just me and my coach and then in the afternoon there are some of the other girls in our group who join in. After my session I’ll go and get some treatment, a massage or some soft tissue work which I do about three times a week.

I train at the English Institute of Sport in Sheffield, where there is a big white indoor 200m track, and weights rooms and gym. We’ve  also got access to all the physiotherapists that are based here, and the treatment rooms, It’s perfect as I can just step off the track straight into physio, it’s perfect.

At the end of the day I don’t really hang around I just drive home, cook some tea and then just relax and fall asleep. I like most food, but I am pretty keen on Jamie Oliver’s cooking, so I might do one of his recipes – I particularly like a Stir fry with ginger and chicken with noodles and vegetables. Its really easy to cook and only takes about 10 minutes, it has to be quite easy and quick as I am usually starving by then

I do always have a pudding too, which is mostly chocolate. I really need something sweet after a savoury meal, so if its not chocolate I will have a yoghurt or a muffin. I don’t have to watch my weight as I will just burn it off the next day.

I probably try to go to bed about 11, I like to have at least eight hours sleep if not more – I need a lot of sleep.

Louise Hudson is the co-founder of Sportsister.com, an online sports magazine for women.