February is Black History Month in the USA and Canada.  In the UK, it is celebrated in October.  Last year’s post was dedicated to Stan Wright.

I will honor this post to Vince Matthews and Wayne Collett.  I was 9 years old when I watched the Munich Olympics in 1972.  I had no idea what was going on in terms of the hostage taking, but I do remember several events, namely the 800 meters (Dave Wottle and his shocking come-from-behind victory), the Marathon (Frank Shorter running alone from 9 km onwards) and of course, the unfortunate Americans in the Men’s 100 meters (Eddie Hart and Rey Robinson missing their quarter final races)

With all the hype on the 42nd anniversary of the 1968 Black Power Silent Gesture protest, have we forgotten the silent protest of Vince Matthews and Wayne Collette?

There are so many books about the 1968 Olympics (including Lee Evans autobiography, as well as Tommie Smith’s), so many movies, and when Gold medalists decide to sell their medals, it hits front page of the newspapers.

Granted, the Israeli massacre deserves full compassion, but I think a lot of track athletes have forgotten about Vince Matthews and Wayne Collett’s silent protest.

With the passing of Bud Greenspan, I don’t even recall seeing this protest in any of his short films.  And Bud was a people guy first!

Vince Matthews came 4th at the 1968 US Olympic Trials and won a Gold medal in the 4x400m relay (setting a WR in the process that lasted 20 years).  In 1972, he reversed that and won Gold medal with Lee Evans being the 4th man and on the relay. 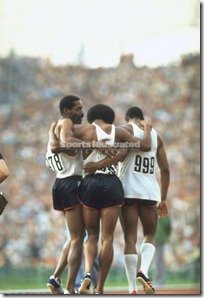 Without a doubt in my mind, John Smith would have been on that podium if it were not for the injury.  On the left is a great photo of sportsmanship, patriotism, and human compassion from a LIFE photo.

When your man is down, if he’s breathing, bleeding or has broken bones, you have to help him get up.

I’ll let the readers decide if they are offended by their actions on the podium during the National Anthem (see video below).  Offended, as in not being properly dressed, not standing to attention, talking and fidgeting the whole time, and having two people on the top podium at the same time.

Of course, that 4x400m relay was a scratch for the Americans as both Vince Matthews and Wayne Collett were suspended for life by the IOC, and with John Smith still injured.  The only man left standing was Lee Evans!

Wayne Collett died on March 17, 2010.  Asked why he didn’t stand to attention, he quoted, “I couldn’t stand there and sing the words because I don’t believe they’re true.  I believe we have the potential to have a beautiful country, but I don’t think we do.”

Vince Matthews would later write his autobiography My race be won.  I will write a detailed review later, but I can say it is one of the most entertaining books on Track and Field.  The amount of corruption and scandals that the big corporate giants (as well as the various Olympic committees) had on the athletes is shocking.

>> My race be won by Vince Matthews

Photos of the 1972 Silent Protest

Below are some photos from LIFE magazine that showed what really went on the podium when the Star Spangled Banner was playing.  In the first photo, that is Dan Ferris &  Douglas F. Ruby on the right with the suits.. 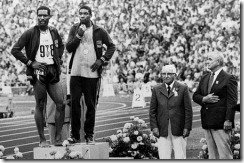 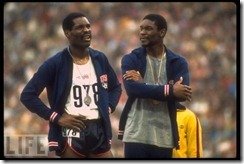 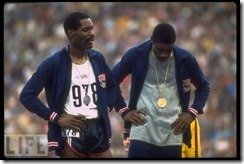 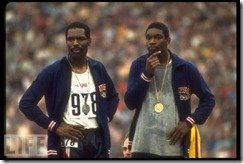 Video of the 400 meter Finals and Silent Protest

Here is the video on YouTube.  What more can I say?  Excellent race execution by Vince Matthews.

UPDATE: Sorry, the video is no longer on YouTube, but here is another version in Italian.