How to Run the Baseball 60 Yard Dash Test

You are here: Home / 40 Yard Dash / How to Run the Baseball 60 Yard Dash Test
4
SHARES
FacebookTwitter 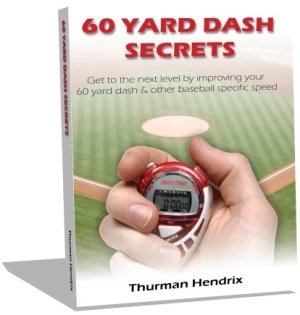 There are a lot of comments (both Facebook and regular comments) in the article Baseball’s 60 Yard Dash – What’s a Good Time?

Back in Vancouver, Derek Hansen and I had the opportunity in our Track Club to train Nathan Taylor (bronze medalist 4x100m Commonwealth Games), Steve Larsen (a bobsledder and Olympian at the 2006 Winter Olympics in Torino), and Ed Welsh (100m sprinter and former professional baseball player with the minor league Anaheim-Los Angeles Angels)

The 60 Yard Dash Test conversation (trash talk?) was getting out of hand, so I had Ed step in and join the conversation.

Basically, Ed has a sprinting background and I was rated #3 fastest in all of the minor leagues in 2000 with a 6.28 second 60 yard-dash ran in baseball cleats from a base stealing sideways stance during training camp in March of 2000.  It was done on a dry, well-groomed grass against other players in the organization in Mesa, Arizona.  Carl Crawford was rated #1 (unsure of his time). That was published in Baseball America magazine in 2000 and Ed was also rated the fastest base runner in the Angels’ organization for that year.  Without a doubt in my mind, Ed Welsh was the fastest Canadian player at the time.

My PB for 55 meters is 6.70 seconds (FAT), set at a Dartmouth College indoor track meet.  The difference between 60 yards and 55 meters is only 13 cm or 5 inches.  But I can’t hit a 95mph fastball, and my throwing arm really sucks.  So good luck getting drafted.

The point is, you better have the skills to play the sport first.  Second point, you need the grades to get into a College or University.  After those two points, let’s talk.

How to Run the Baseball 60 Yard Dash Test

I can coach Track, and make you fast, but I never played pro baseball.  Thurman Hendrix is a former Minor League Baseball Player

I had a chance to review this manual 60 Yard Dash Secrets.

I have to admit, at 151 pages, he has poured everything that he knows into his 60 Yard Dash Secrets ebook.

In his eBook, you will learn:

* The Home-to-First test for baseball speed is gaining popularity among scouts because it is usually easier to measure and much more practical than a 60 yard dash.

There are also two chapters dedicated to proper running form along with his beliefs on the use of resistance and assistance speed training drills such as parachute runs and hill training.

If you have the skills to play baseball (very important criteria) and you need improve your sport specific speed, this 60 Yard Dash Secrets ebook is highly recommended.