Kirani James of Grenada, currently a sophomore at the University of Alabama, won the SEC Championships Men’s 400 meters in a time of 44.80, just missing the 44.57 World Record set by Kerron Clement in 2005.

Just a couple of things to point out before we get to the video.

First, note the block setup on the curve, whether it’s banked or not.  You want a best straight imaginary line that runs along the tangent of the curve.  This way, the first few steps out of the blocks is a straight line before you negotiate the curve.  I like the way Kirani James sets his blocks up, as this is how I coach my athletes. 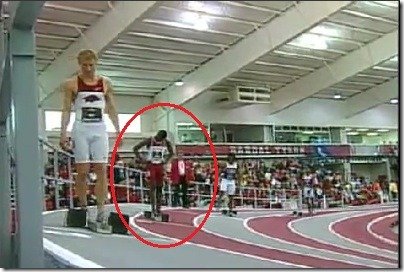 Second, although technically it’s illegal to have your hands touching outside the line, most officials allow it because the indoor tracks are not the full width as an outdoor track.  As long as the hands are behind the (imaginary) starting line, and touching it, the officials will let it go.

Note the White line is for the 200 meters, and the Blue line is for 400m to allow for the extra distance to break for the pole after 2 turns. 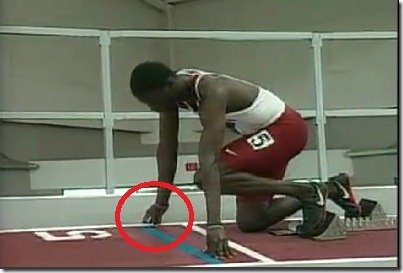 See also  Kirani James vs Lashawn Merritt – What Have We Learned?